Yesterday, Huawei announced that the P30 series has been listed for 85 days (as of June 20), breaking through 10 million units. This is 62 days faster than the P20 series. As one of Huawei’s most popular and explosive models, the P30 Pro attracted the interest of Japanese research firm, Fomalhaut Techno Solutions. The firm focused is research on the number of US components that are part of the Huawei P30 Pro. 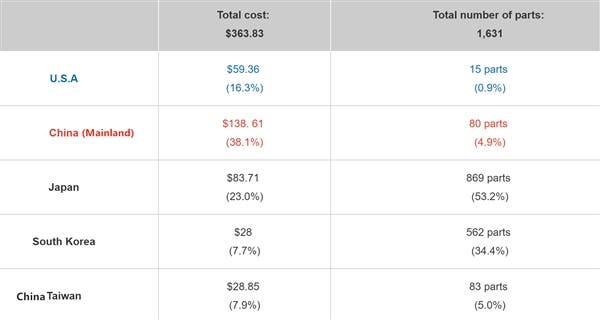 The disassembly of the Huawei P30 Pro shows that of the total 1631 components, only 15 were provided by US companies provide. This means that only 0.9% of this phone uses parts from Us companies. In addition, these 15 components cost $59.36 per unit, accounting for 16.3% of the total price.

In more detail, the P30 Pro’s OLED screen is provided by BOE. This is the most expensive single component on this phone costing $84. It is followed by  Micron’s DRAM memory chip, which costs $40.96. Next, are the Kirin 980 SoC and Samsung’s flash which costs $30 and $28.16 respectively. As for Japanese companies, the core component is the CMOS sensor from Sony. The analysis shows that the total material cost of the P30 Pro is about $363.83. This is for reference only and it is by no means exact.

Next Apple slightly increases iPhone production due to Huawei's problems