The Lenovo Z6 is launching on July 4th at 11:30 am, the company revealed earlier today. This revelation lines up with earlier rumors that favor early July release date. The device when released will be the third smartphone in Lenovo’s Z6 family joining the Z6 Youth edition and Z6Pro.

The company has been actively drip-feeding us with some of the device key features. And along alongside today’s announcement, the Chinese firm also does confirm some vital details. First off, the launch teaser confirms that the Z6 will debut with a 6.39-inch OLED display with a water-drop notch. It further confirms it will come fitted with a 4000mAh battery, and at just 8mm thick, and at 159g, the Z6 is 6g lighter than Meizu 16Xs, and 47g lighter than one plus 7 Pro. The brand has earlier revealed that the Z6 display will support HDR10 and DCI-P3 wide color gamut. It is also confirmed to get a sampling rate of 120Hz and feature De-Mura screen coloring technology. 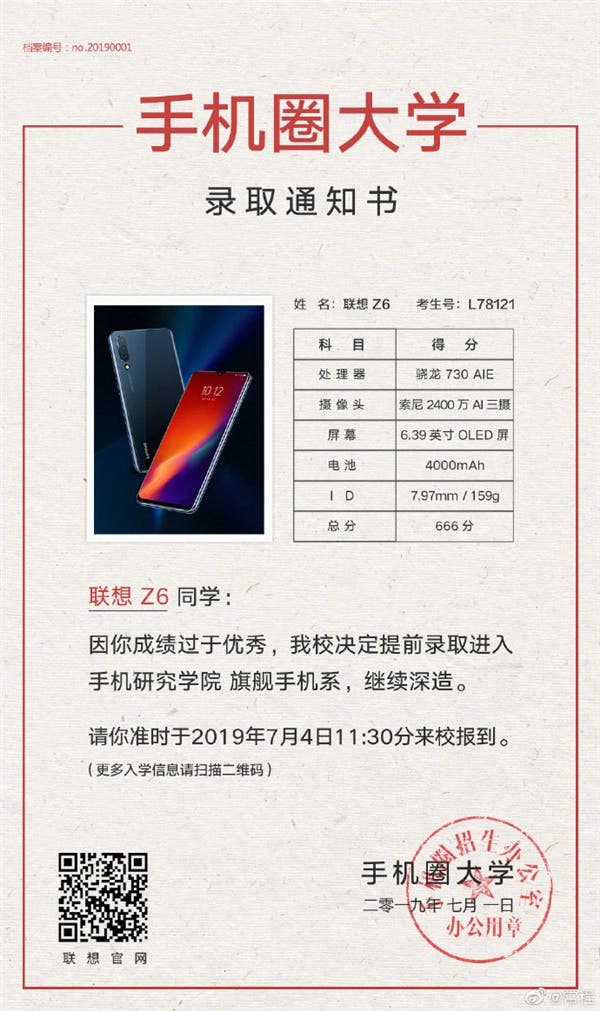 Besides that, it has been confirmed it will get the same SoC as the K20 from Redmi – the Snapdragon 730 that Qualcomm built on the 8 nm process, with a similar CPU architecture to the Snapdragon 855, though at a lesser price.

In the photographic unit, the Lenovo Z6 will come fitted with a triple rear camera setup. One of which is a primary 24MP Sony IMX576 sensor,  with an 8MP telephoto shooter, and a 5MP wide-angle lens. Software enhancements and AI will take care of night and beauty modes, and a 16MP shooter on the front will take care of your selfie needs.

With the spate of leaks and teaser, it’s apparent that the company might reveal all info including the pricing before the due date.