It’s official. And as most of us may already know, its that time of the year for another unpacked event by Samsung. Reports from a few weeks back had speculated that the event meant for the Galaxy Note 10 might be fixed for August 7, and now here we go. Samsung has finally issued media invites to its 2019 Galaxy unpacked event.

This year’s unpacked event will hold on August 7th as reported earlier. And what is more, there is no denying the fact that the Galaxy Note 10 will be the star of the August event. 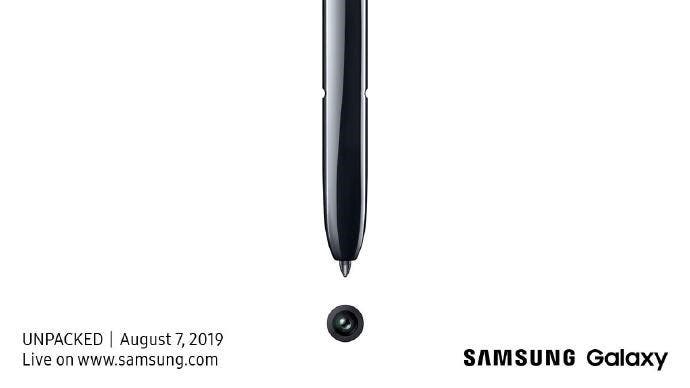 Any official info so far? The official invite doesn’t reveal anything beyond a single camera and an S Pen, and also there hasn’t been any official teaser. However, recent leaks and rumors suggest the device will come with a single front-facing camera centrally placed. There are also reports that the GalaxyNote 10 will come in two variants with a 6.3-inch and 6.75-inch display titled Galaxy Note 10 and Galaxy Note 10+, respectively, though some reports also suggest the plus-sized variant could be dubbed the Note 10 Pro.

Both models will retain the proprietary S Pen and are tipped to drop to ditch the 3.5mm headphone port, in a move that could signal a change to come with next year’s Galaxy S11 too. Although some other report also counters this, claiming the headphone jack might be part of the package. A recent trademark filing also points to the chances of the Note 10 featuring a DepthVision lens specially designed for ToF (time-of-flight) or depth-aware cameras.

Do note that all of these are mere rumors, but we are always on the lookout for concrete info.