As previously announced, Samsung will equip Galaxy Note 10 with a 3D ToF camera to increase the performance of the camera. The current development is that Samsung has applied for a trademark application from DepthVision Lens. The DepthVision lens seems to be specially designed for ToF (time-of-flight) or depth-aware cameras. With this, the rear of the top-of-the-line Samsung Galaxy Note 10 Pro will have four cameras, including a 3D ToF camera. In contrast, the standard version will come with a triple rear camera without ToF lens. 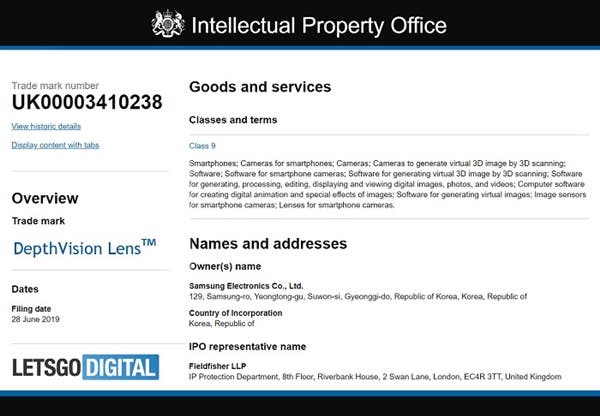 Earlier, there was news that Samsung will provide three variable aperture cameras for the Galaxy Note 10. Specifically, f/1.5 and f/2.4 of the Galaxy S10 series will join f/1.8. This will help with the light amount so as to take pictures with high quality.

It is reported that Samsung will introduce two versions of Note 10. In addition to the standard version, there will be a Pro version which uses a punch-hole camera solution. The top of the Note 10 device shows two holes, which should be the front dual camera.

In the core configuration, Samsung Galaxy Note 10 Pro is equipped with a Qualcomm Snapdragon 855 flagship platform. It also comes with up to 12GB of RAM, standard UFS 3.0 flash memory, rear 12MP main camera + 12MP telephoto lens+ 16MP super wide-angle + TOF lens. The lights will be kept on with a 4500 mAh which will support at least 25W fast charge. There are rumors that it could have a 45W fast charge.

Next Huawei's ban lifted but with a catch