Many netizens found that Huawei now has a new version of the Huawei P30. This version comes in Pearlescent Fritillary, Sky, Bright Black and Red Tea Orange options. According to the Jingdong presale listing, this phone sells for 3988 yuan ($580). The corresponding storage space is 6GB+128GB (Standard Edition) and the official shipping time is July 5. 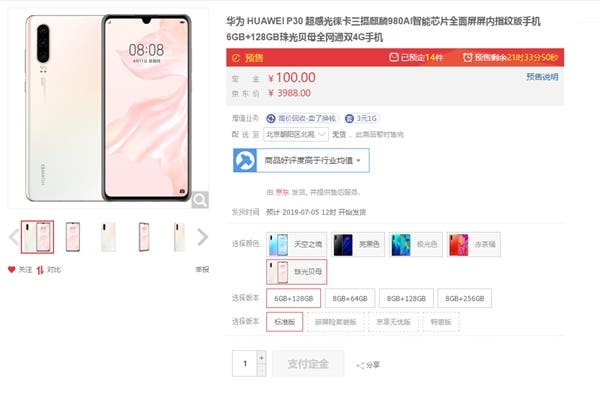 Apart from the memory changes, the P30 new version still has hardware features of the other versions. It uses a 6.1-inch pearl screen with a resolution of 2340×1080. Under the hood, we have a Kirin 980 processor and a 3650 mAh keeps the lights on. On the front, we have a 32MP selfie camera and a triple rear camera setup. The rear camera configuration is 40MP super-sensing camera + 16MP super wide-angle camera + 8MP telephoto shooter. This new RYYB filter array design integrates more light. The independent ISP and super-sensitive AI image engine, let you shine even in the dark.

In addition, the Huawei P30 is equipped with GPU Turbo 3.0 technology. This is a soft and hard graphics acceleration technology that can greatly improve the graphics processing efficiency of the GPU. Last week, He Gang, president of Huawei’s consumer mobile phone product line was proud to say that the Huawei P30 series exceeded 10 million units in 85 days. This is about 62 days earlier than the time it took the P20 series to hit 10 million units.