After revealing its Nubia X 5G smartphone earlier in June, ZTE’s sub-brand Nubia could be prepping a new smartphone (Nubia Z20 ) just in time for the IFA congress later this year.

For thousands of people in Chile yesterday, the Moon passed directly between Earth and the Sun, casting a day-blotting shadow just prior to the real dusk. And of course, there are pictures to show for it. Nubia took advantage of the natural occurrence as it shared some images it captured with an unreleased device. The images are of less concern to us here, what matters most here is the device/phone that clicked the images.

The photos were actually taken by a Weibo user named @ Astroman201410.  The user in a translated Weibo post claimed to have gone through “More than 30 hours of travel, flying over 20,000 km across 12 time zones, I came to La Serena, Chile, only to witness the total solar eclipse.” 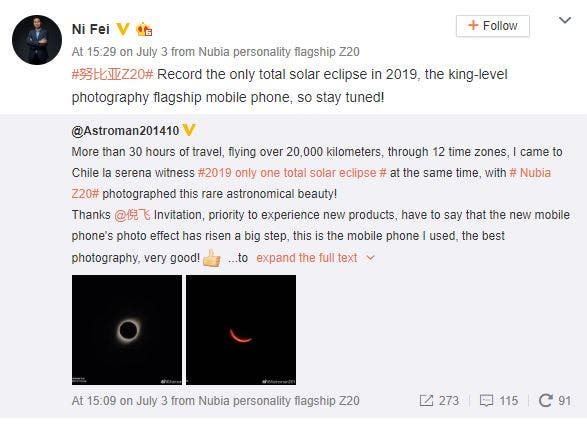 Interestingly, the photos which you can see below has the Shot on Nubia Z20 watermarks on the left-hand corner. Nubia GM Ni Fei shared the post with words of praises on the Nubia Z20 camera. Although neither the GM nor the Weibo user has revealed details of the Nubia Z20, the post is a signal the Z20 is in the making.

And if that pans out, it then means the brand will be skipping the Nubia Z19. Speaking of expected spec, we expect the device to come with Android 9, a Snapdragon 855 processor, improved camera, and perhaps a bigger battery.

Next New Arrival Gifts—guess prices and get new XIDU laptops for free!