On July 2, Xiaomi released the Xiaomi CC9 Meitu Custom Version aka “Little Fairy”. Unlike the other two, this phone comes with Meitu’s own photography algorithm. The latter improves the phone’s shooting capabilities and provides a superior camera performance. Moreover, it’s a real indicator Meitu will continue developing camera software. Tomorrow, on July 5, this edition will go on sale. The handset is packed with an 8GB + 256GB memory combination and it will be sold for 2599 yuan ($378). This is way cheaper than the previous Meitu phones with similar capabilities. 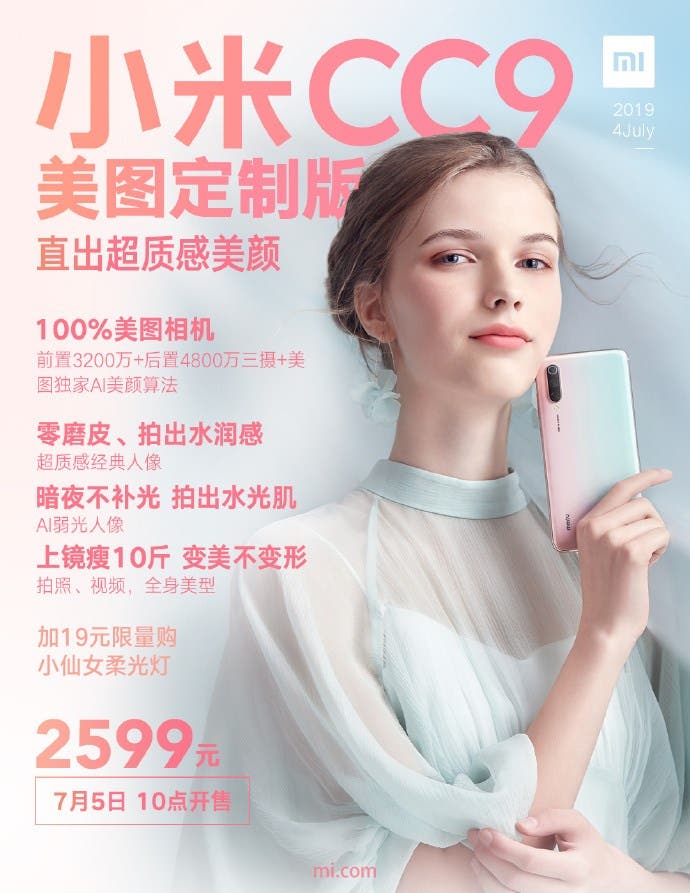 If you remember, Xiaomi announced the acquisition of Meitu phone business at the end of last year. Later, it became known there will be a new series, namely CC. This line has three options of the original CC9, the CC9e, and the female-focused Xiaomi CC9 Meitu Custom Version.

The main difference in this model is the more powerful beauty filter based on new technology. As said above, Xiaomi is responsible for hardware production and development. But the camera part is 100% developed by Meitu.

The Xiaomi CC9 Meitu Custom Version sports a Xiaomi’s native camera with super-clear resolution. But the latter is combined with the Meitu AI ‘brain’. This cooperation brings a variety of portrait camera modes, including classic portraits, movie portraits, party models, etc. There are also 22 kinds of Beauty effects. Of course, it supports super night scene.

The rest of the features include a 6.39-inch AMOLED screen, a Qualcomm Snapdragon 710 processor, a 4030mAh battery, a front 32MP camera, a rear Sony 48MP triple-camera, and so on.

Next Redmi 7A with upgraded camera specs launched in India