Motorola launched the One Vision back in May only in some key international markets. And like we reported earlier, the device has now been rebadged and launched in the domestic market (China) as the Motorola P50. It is the same device as the Motorola One Vision. But while the Vision runs on near stock Android, the MotorolaP50 boots Android 9 with ZUI. Other than that, both devices share the same hardware and design.

The device is to go on sale from July 20, with pre-orders beginning from July 15th. Motorola is offering the P50 in two color options – Blue and Bronze. The Motorola P50 is available in a lone 6GB/128GB memory configuration with a starting price of CNY 2,499/$363. Pre-orders and sales begin from July 15th via JD.com, Suning.com, and Tmall.

Similar to the Motorola One Vision, the P50  comes encased in a polycarbonate shell fitted with a 6.3-inch Full HD+ (2520×1080 pixels) resolution display. It has the punch hone style notch which makes it achieve a 21:9 aspect ratio. The screen has a layer of Gorilla Glass for added protection against general wear and tear, and under the hood, it houses Samsung’s Exynos 9609 octa-core chipset backed by Mali-G72 MP3 graphics processor. 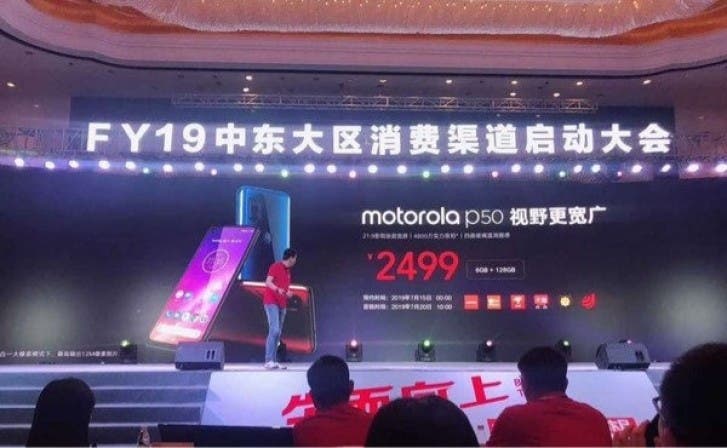 Elsewhere, the device comes fitted with a 3,500mAh battery under its hood with support for 15W fast charging. And like we stated earlier, the P50 boots Android Pie with ZUI out of the box.

And similar to the One Vision, the P50 has a dual camera set up on the rear – a main 48MP snapper with f/1.7 aperture with a secondary 5MP depth sensor. Finally, on the camera, the Motorola P50 has a 25MP camera within the front punch hole.

Next Huawei Developer Conference will be held on August 9th, there may be HongMeng OS