According to recent reports, Chinese manufacturing giant, Xiaomi has commenced recruitment for Android Q beta program. The current recruitment is specific to Xiaomi Mi 9 users. If you own this smartphone and need a first feel of Android Q, you can sign up for the beta. Please note that this is not the Stock Android Q beta but MIUI beta based on Android Q. 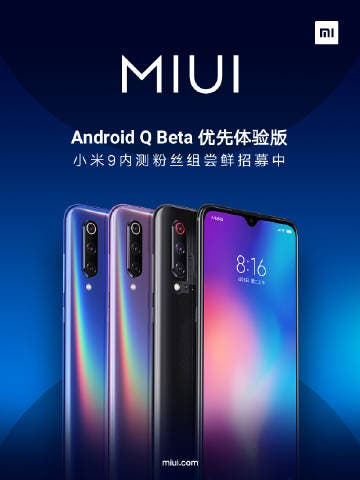 This means that both users and developers can now access the tweaks by Xiaomi on Android Q. As usual, this beta will come with a couple of bugs. This means that if the Xiaomi Mi 9 is your daily driver, you may want to hold on. The stable version which will arrive after the beta will be free of these bugs. This is usually a better update to adopt. As of now, some bugs have already been identified in the beta. This includes abrupt shutdown when activating the one-handed mode, random camera app crashes and volume controls not working from time to time.

As of now, the recruitment for Xiaomi Mi 9 beta testers is restricted to Chinese ROM. The global MIUI ROM beta will probably be available sometime later.

Previous Xiaomi to focus on its digital, MIX and CC series