After months of speculations, and many blurry leaks, the rumored Samsung Galaxy A90 still remains elusive. But it looks like we the device might be seeing the light of the day soon, as recent rumors suggest it could come in 4G and 5G variants.

Out of nowhere, the Samsung Galaxy A90 5G variant earlier today surfaced on the popular Geekbench database. It goes with the SM-A908N with the Snapdragon 855 SoC, 6GB RAM, and Android Pie.

And that is about all we could glean from the Geekbench listing, however, previous reports suggest it could come with some mouth-watering specs. First off, the Samsung Galaxy A90 4G variant will launch with a 6.7-inch display, in-display fingerprint scanner, and triple rear camera setup.  The main camera has a 48 MP  sensor coupled with a 12 MP + 5 MP resolution and a new mysterious exclusive feature called “Tilt OIS”. 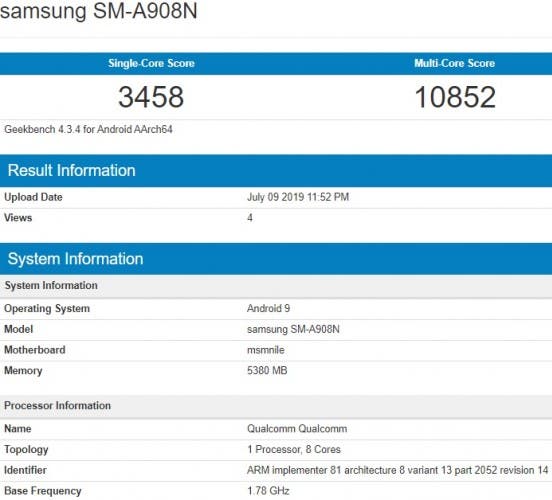 The  5G variant gets the same display, with the same fingerprint scanner, the same main camera sensor, but will ditch the 8MP secondary sensor for a 12MP sensor, while the third 5MO sensor remains. The Galaxy A90 will be the first to feature Qualcomm’s SD 855 SoC.