Chinese smartphone maker, OnePlus has been long rumored to take a slice of the Smart TV market. But it wants until earlier this year the company officially to Trustedreviews that it will take a shot at it this year. No specific launch date has been tied to the OneplusTV. All the company is just saying for now is that the product will be released when it is ready.

Well, it appears the actual launch date might not be far off. A Oneplus TV remote has now been certified by the Bluetooth SIG, with the model number RC-001A model. Other than the fact that supports Bluetooth 4.2, there nothing else to take from the certification documents. However, it is an indication that the OneplusTV plan is still very much alive.

Oneplus has yet to delve into official details of the OneplusTV, but it did reveal earlier this year that the  TV lineup is going all-in on smart features and that the OnePlus TV will be capable of doing many of the things you’d typically rely on your phone for.

OnePlus CEO Pete Lau a few months ago hinted that the Oneplus TV will be unique in a way. He stated  that “We don’t want to release something that’s more or less already out there in the market.” 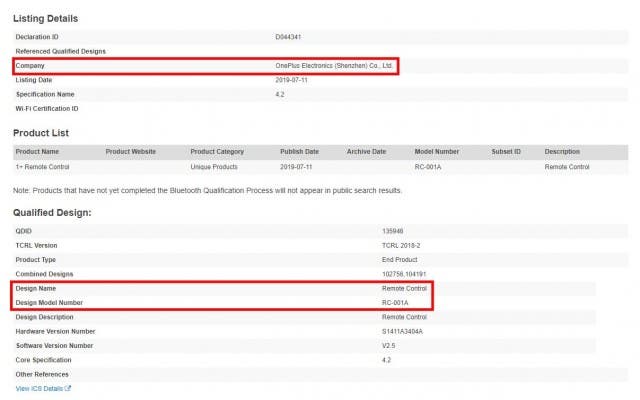 Early reports point to a 1+ TV  with a 4K HDR panel, and an onboard AI assistant (likely Google Assistant).  The company is reported to have settled for an LCD panel instead of an OLED panel, perhaps to keep pricing more competitive.