Samsung is rolling out a new update for the Galaxy A40 in Germany. The update bumps up Security Patch to July 2019 but also introduces Samsung Pay support for the midrange device.

The midrange handset is receiving the A405FNXXU2ASG1 firmware update. The rollout is at a very early stage, so it’s natural to see a very limited availability. However, more units of the Galaxy A40 should receive the OTA update in the coming days. The South-Korean maker already confirmed that Samsung Pay has also been added to Galaxy A40 devices in Sweden, Switzerland, Spain, and the United Kingdom. However, the update is yet to reach these countries. 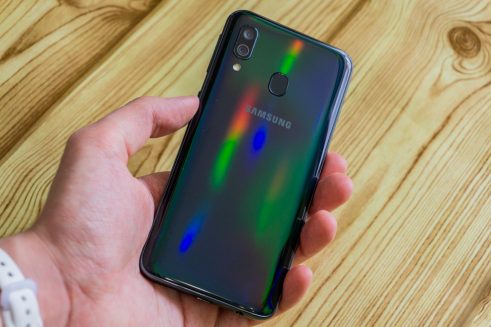 Samsung introduced the Galaxy A40 back in March with Exynos 7904 SoC and a 5.9-inch AMOLED display with a teardrop notch. Multi-tasking purposes are covered by 4GB of RAM, while the storage amount is fixed in 64GB. Worth noting, that the usual microSD card support is here, in case you need more storage. The handset boasts a simple dual camera setup with a 16MP sensor plus a 5MP secondary camera. Inside the notch, there’s a 25MP selfie snapper. Last but not least the device comes with a 3,000mAh and has Android 9 Pie with One UI running atop.

The first country to get this update is German, and that’s not a surprise. After all, users have been complaining about phone app crashes and several other bugs in the handset that appeared after the last update. Hopefully, the new update comes to address all these issues. You can check if the new update is available for you by going into the Software update section of the Settings app on your phone and tapping the Download and install option.

Next Realme's latest teaser hints at a 855+ powered Realme phone