Chipset maker Qualcomm, out of nowhere in the early hours of yesterday made a surprising announcement. It officially announced the  SD 855 plus built for speed just when the 5G network is fast rolling out in many countries. Following the announcement, ASUS immediately broke the news that its upcoming ROG Phone 2 will be based on the new SoC. Well, ASUS perhaps isn’t the only OEM rooting for the souped-up SD 855 SoC. OPPO spin-off brand Realme appears to be working on a new device with the same SoC. 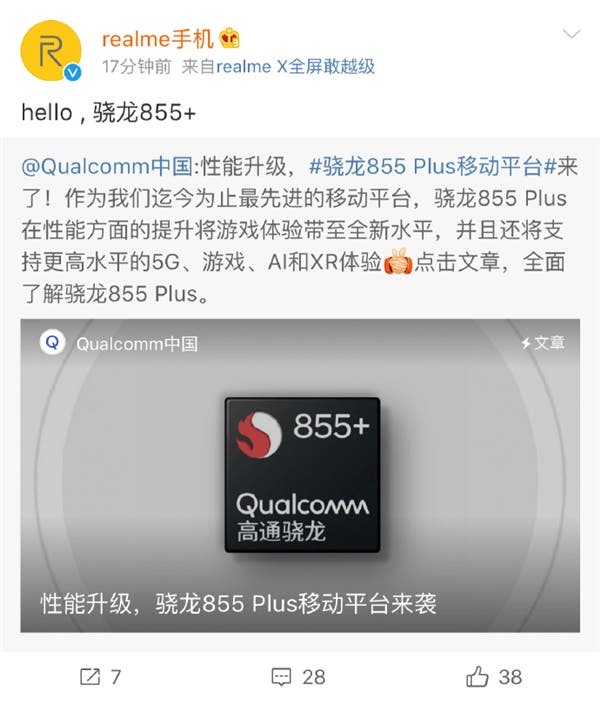 We say so because the company wasted no time dropping a clue on Weibo that suggests so. Over on Weibo, the OPPO spin-off released a SD855 plus related update extolling the features of the new SoC.

The update reads: Hello, Snapdragon 855+”. There is no direct hint of an impending Realme phone with the SoC, though. But Realme’s statement is undoubtedly suggesting that it has a Realme phone with the SD 855+ in the making. The brand in the run up to the launch of the Realme X and X lite was rumored to be working on a SD 855 phone. That didn’t happen though.

The brand at the sideline of the event hinted that it has a 5G phone with Qualcomm’s flagship SoC in the making. That device perhaps could actually come stuffed with the latest SoC. We hope to get more details about the supposed Realme phone in the coming weeks.

The new SoC is aimed at gaming phones and other devices that will tap into 5G, and that makes us think the said Realme X will be the brand first foray into the gaming segment.

Previous Galaxy A40 gets Samsung Pay through a new software update

Next Honor 9X/Pro bares it all in freshly leaked renders