Xiaomi’s Black Shark 2 Pro will go official on July 30 and the web is going wild with leaks for the gaming flagship. Earlier today we got a glimpse of the handset performance via an AnTuTu benchmark. Then, the multiple variants and colors available at launch were revealed. Now a live image surfaced on Weibo revealing the handset in all glory. 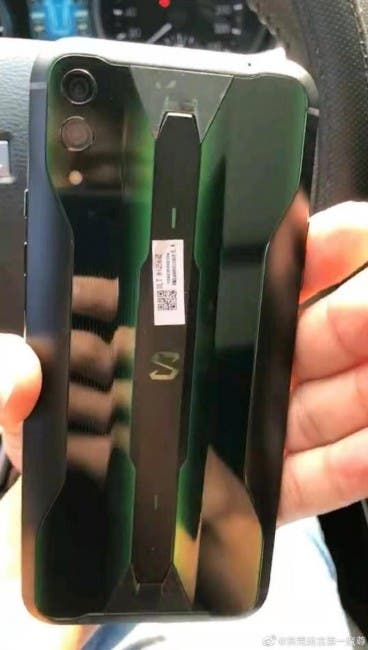 The picture shows the rear part of the Black Shark 2 Pro which is similar to the non-Pro variant. The key difference is on the LED strips. It reveals the light emanating from around the Black Shark logo as well as the corners. This design feature was teased in multiple renders, and now we can have a glimpse of how it will be in real life. Worth noting that this new Pro variant seems to come with a revamped glass finish when compared to the standard Shark 2.

The BlackShark 2 Pro will boast the latest Snapdragon 855+ chip enabling it to absolutely smash through any kind of games on Android. Other specs were also confirmed by the AnTuTu listing such as 12GB RAM and Android Pie. Worth noting that the handset will come in variants with up to 512GB of onboard storage. The screen will support FullHD+ resolution. The Black Shark 2 Pro posted a score of 405,598 points in AnTuTu’s tests.

As previously mentioned, the new gaming flagship will go official on July 30. So let’s see how many leaks will pop out until the release date.