Chinese manufacturing giant, Huawei, is a household name in the Chinese smartphone market. Over the years, Huawei’s performance has taken it to the top smartphone brand in China. According to recent information from China, the Hangzhou police raided a production factory for fake Huawei smartphones. The police seized over 600 mobile phones on the spot. 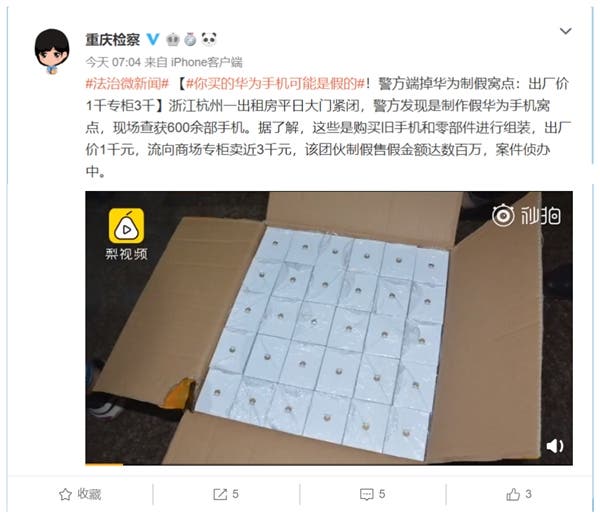 According to the police, discovering the fake Huawei smartphones factory was accidental. The room is full of Huawei mobile phone accessories, and everyone has a clear division of labour. These workers basically refurbish an old Huawei phone and re-package it in a new box. According to the police, the factory is run professionally and different personnel handles different duties. These cottage goods are completely fake from the packaging to the appearance of mobile phones. However fake the phone appear, there seems to be a market for these fake (perhaps cheaper) goods. In less than one year, the amount of fake sales is up to several million yuan in China.

These devices probably don’t go outside China, for now, however, if the fake production continues, it could spread like wildfire. For those willing to purchase smartphones, please use the official website or verified/major e-commerce platforms. With this, buyers can escape buying these fake products. In addition, we have to be wary of unusually low prices. Furthermore, these fake products sometimes come with mouthwatering offers and coupons.