While Samsung has just announced its flagship S series tablet today, the company still has some more refreshes planned in the segment. A new model with Samsung Galaxy Tab A3 XL moniker has popped up on the Google Play Console revealing its key hardware specifications. Also accompanying it is a render of the slate which reveals a thin bezel design similar to that of the Tab S5e, as reported by 91mobiles. 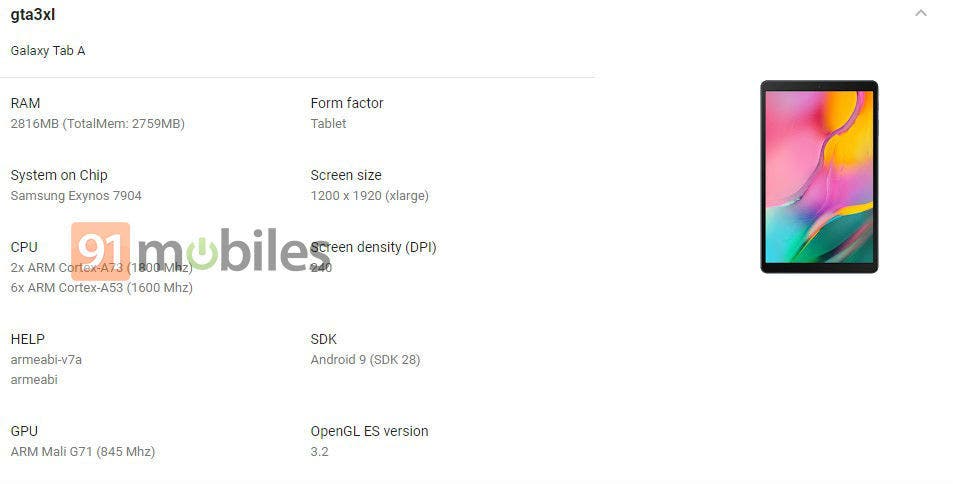 The Tab A3 XL will be powered by an octa-core Exynos 7904 processor and a Mali G71 GPU. The software side of things should be handled by Android 9 Pie-based custom One UI software from Samsung. It also appears that there will be a Wi-Fi and a cellular version as the codename ‘gta3xlwifi’ on one of those listing suggests.

The resolution of both the Galaxy Tab models has also been mentioned but the screen size isn’t there. We would have expected Samsung to release these two models at the Tab S6 launch today but that hasn’t happened clearly.

An unannounced Samsung tablet bearing model number SM-T515 had been spotted on the Geekbench benchmark database last month, revealing some of its key hardware specifications. It also was spotted on the Bluetooth SIG listing with the same moniker.