Chinese manufacturing giant, Huawei, is going against all odds to post a strong statement to the world. Irrespective of the US ban which many believe will comatose the company, Huawei’s 2019 shipments have been amazing. The company is still the largest OEM in China and its Q2 2019 shipment in China increased by 38% YoY. Recently, Strategy Analytics released the global smartphone market shipments report for Q2 2019. According to the report, the global smartphone shipments fell by 3% year-on-year to 341 million units (for Q2 2019). 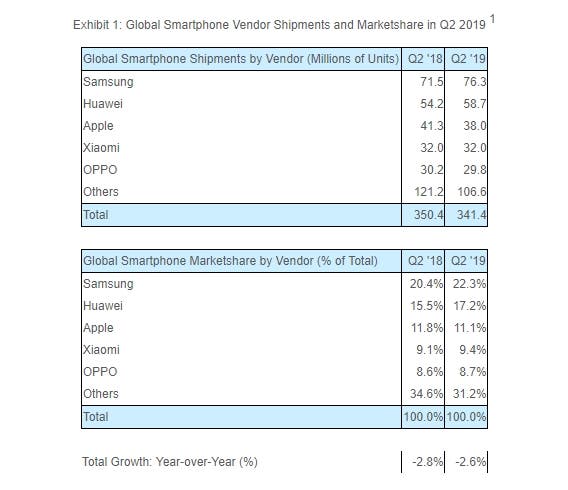 Samsung retains its first position with 22.3% of the global smartphone market share. Huawei ranks second with 17.2% while Apple is third with 11.1% market share. Xiaomi and Oppo are fourth and fifth with 9.4% and 8.7% market share respectively.

Samsung’s global smartphone shipments were 76.3 million units in Q2 this year, up 7% YoY. It’s market share increased from 20% to 22%. Entry-level smartphones were vital to Samsung’s performance but the profit margin is low due to fierce competition. As for Huawei, its global smartphone shipments grew 8% year-on-year, from 54.2 million in Q2 in 2018 to 58.7 million in Q2 in 2019. Huawei’s global smartphone market share was 17% (Q2 2019), up from 15% a year ago. Huawei is flying high in China as it seeks to compensate for regulatory uncertainty in other major regions such as North America and Western Europe.

Apple iPhone shipments were 38 million units for the quarter under consideration. Its global smartphone market share was 11%, down 1% from 12% a year ago. Apple iPhone shipments fell 8% year-on-year, the worst performer among the top five smartphone players in the world. Looking at Xiaomi, its global smartphone market share of 9% is basically the same as last year. Xiaomi is still very strong in India, but in China it is trying to catch up with Huawei. Like Xiaomi, Oppo’s 9% market share is not much different from last year. It is reported that OPPO is entering the Western European market through new models such as Reno 5G, but it still faces competitive pressure from Huawei in China.