Today morning the ASUS ROG Gaming Phone 2 went on sale. But it didn’t last long. In 73 seconds, there were sold over 10,000 units. Thus, many users didn’t get their own units though they have reserved it long ago. ROG officially apologized on Weibo, saying that the ROG production line and staff are fully committed to open the second wave of purchase on August 4 and August 7. The third wave of purchase will be live on August 12. 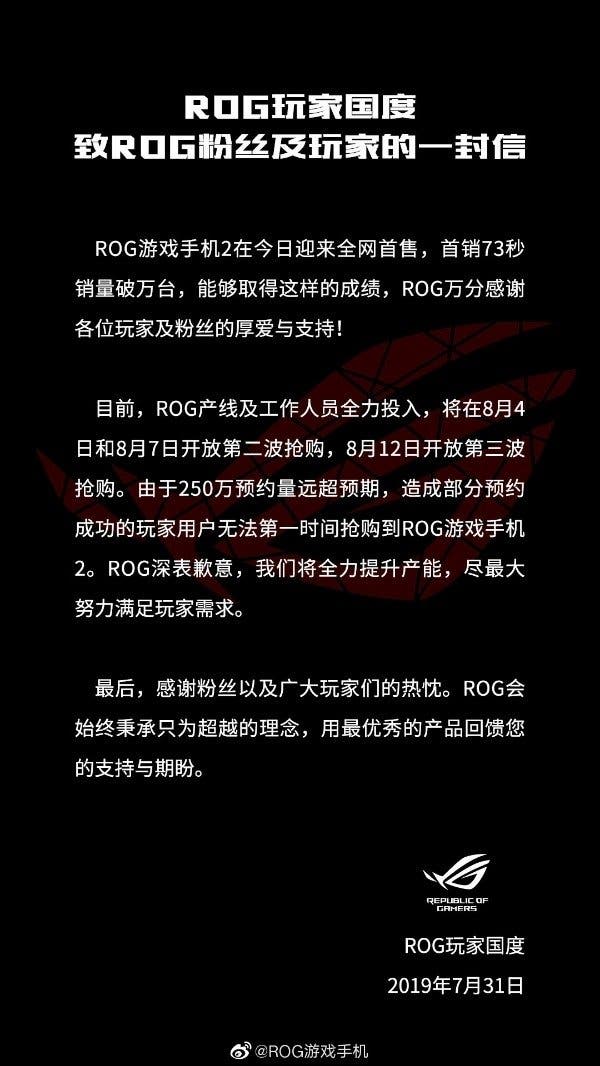 Previously, the ROG Phone 2 had a reservation volume of 2.5 million in Jingdong. At the moment, after the first wave of purchase, the reservation was reopened, and the booking amount soon exceeded 110,000.

So from these numbers, we can judge this handset is very popular. But it’s not accidental. Besides the fact we are dealing with the first Snapdragon 855 Plus smartphone, it is also one of the most powerful gaming handsets.

As said, under the hood, it carries a Snapdragon 855 Plus processor. The latter is paired with up to 12GB of RAM, up to 512GB of UFS 3.0 storage, and a 6000mAh large-capacity battery, which supports QC4.0 fast charge and external clip cooler.

In terms of camera, the ASUS ROG Phone 2 sports a 24MP front camera and dual rear camera. The latter consists of a 48-megapixel Sony IMX586 sensor and a 13_megapixel 125-degree super wide-angle sensor.

Next Apple: gains of 53.8 billion dollars but iPhone revenues are falling