Back in May, HTC started rolling out the Android 9 Pie update for the HTC U11. However, it was limited to some specific regions. Now, the Taiwanese company is expanding the rollout of Pie to Europe.

The update in question bears 3.31.401.1 version number weighing in at 1,31GB. It brings all the goodies introduced by Android Pie such as a new System UI, revamped Quick Settings, More Notifications Controls and Digital Wellbeing. Besides that, HTC is also providing some specific goodies for its software through this update. 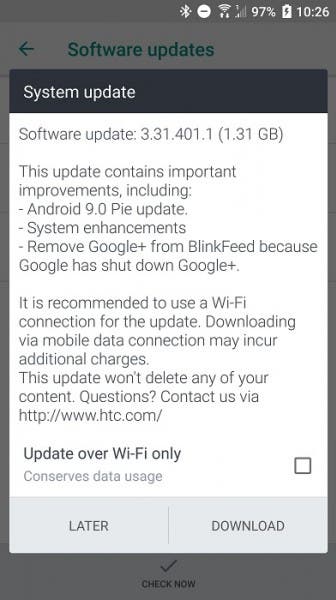 Since Google has shut down Google+, the Taiwanese decided to remove it completely from the BlinkFeed panel. The system also received some enhancements to increase the performance of the handset. The HTC U11 was released back in 2017 with Snapdragon 835. Now we’re in 2019, the age of full-screen designs, quad-camera setup and the HTC U11 seems a little obsolete. Still, it’s great to now that users that are still rocking a U11 will be running an updated Android release in just a few days.

The Taiwanese firm has been operating in the red for quite some time, but still, it’s good to see that they are keeping their promises. The update is currently rolling out in Belgium, Italy and Switzerland. Since it is rolling out OTA in a gradual form, it may take some days to reach all eligible units.