Not long ago, Apple announced the third-quarter financial report for the fiscal year 2019, showing that its research and development spending hit a record high. 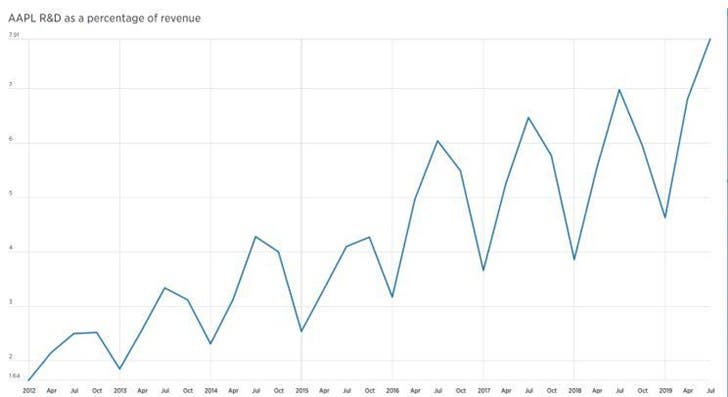 The iPhone’s revenue for the last quarter was down 12% from the same period last year. As a result, Apple is investing in core technologies that may power unreleased devices. But we should point out the open technology development and exploration comes at a price.

Although Apple’s R&D spending in the third quarter has risen, it still lags behind other technology companies. In the same quarter, Microsoft used 13.4% of its revenue for research and development, and Google invested 15.7% of its total revenue.

Apple Chief Financial Officer Luca Maestri explained Apple’s growing R&D investment in an earnings conference call. He said: ‘We want to improve the user experience and differentiate our products and services in the marketplace. So, we will continue to do that. There are some types of investments, of course, that are very strategic for us and they will have long-term implications.’

It’s hard to determine where Apple’s R&D spending is concentrated. Some of them may be used for products that have already been released, while others will be used to develop future products, such as the secret car project ‘Project Titan’ and the rumored augmented reality helmet.

Next OnePlus 7 is receiving OxygenOS 9.5.8 update with August security patch