Huawei at its developer conference earlier this month announced its own Harmony OS alongside the  EMUI 10. The arrival of the  EMUI 10  further prooved that the Chinese firm isn’t entirely giving up on Google’s Android OS. And while the firm has yet to detail the new skin, we do know for sure that it is based on Android Q, and that alone is a good indication that a number of Google’s changes will be coming to Huawei devices.

When will Your Huawei/Honor device get EMUI 10 update?

When will your Huawei phone get the EMUI 10 update? That is perhaps the questions on everyone’s lips right now. Well, we do know that Huawei will begin the rollout with its current top shot – the Huawei P30 on September 8th, but the EMUI release schedule for other devices before now remains unknown. Now, we have got the EMUI 10 update schedule for other Huawei and Honor devices in China.

Following the EMUI 10 update roll out to the Huawei P30 series on September 8, the Mate 20 line up is due to get the update sometime in late September 2019. This includes the entire devices in the Huawei Mate 20 including the – Huawei Mate 20, Mate 20 Pro, Mate 20X, and Mate 20 RS Porsche Design. Still, around late September, Huawei’s Honor brand will release the Magic UI 3.0/Android Q beta update for the  Honor 20, Honor 20 Pro, Honor V20, and Honor Magic 2. 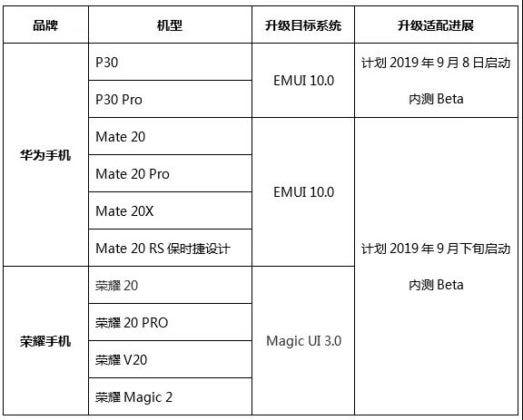 Do note that the rollout might be delayed, so the firm might not entirely stick to the time frame. But do not fret as the Chinese firm looks committed to a timely rollout. You can head over to this page to find a number of devices that are planned to receive the EMUI 10 update.