OnePlus is gearing up to unveil its first high-end smart TV with 55-inch and QLED technology. Today a set of new details about the TV have surfaced on the web, giving us a little more about OnePlus’ new product niche.

A screenshot popped out from what seems to be Google Play Developer Console. The listing reveals that OnePlus TV, codename as “Dosa” (a South Indian dish). According to the leak, the TV  will be powered by a yet-unknown MediaTek MT5670 SoC. This chipset comes with a Mali-G51 Quad-Core GPU. Furthermore, the leaked sheet also reveals the amount of 3GB of RAM and the presence of Android 9 Pie straight out of the box. 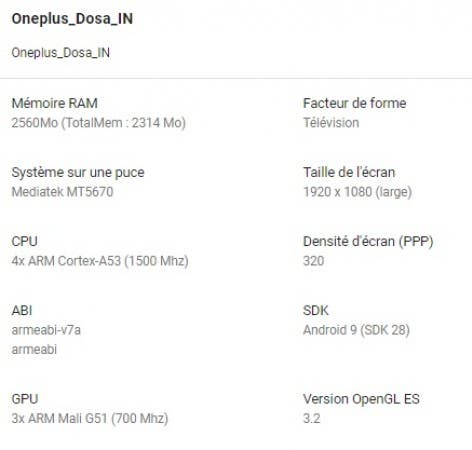 Worth noting that the listing reveals the FHD resolution, however, that’s likely the specific resolution used for the Menu. The TV should dynamically switch to the 4K resolution always that required. OnePlus CEO Pete Lau revealed to Gadgets360 that the TV will run an “improved UI” atop Android TV. It’s exactly what the company does with OxygenOS, which is an altered version of vanilla Android. Of course, we can’t say if the UI of the TV will be drastically different from Android TV. The OS will also offer better integration for owners of OnePlus device, that will be able to enter a text on the TV via the handset.

In the same interview, Lau further stated that OnePlus TV won’t be budget-friendly like Xiaomi’s Mi TV range. Instead, the company will be focusing on the flagship premium positioning. The companies will aim in giants like Samsung and Sony, however, it will still be slightly cheaper than these companies thanks to the partnership with Amazon. The TV will be exclusively released in India, but will eventually come for more markets in the future.

Previous Motorola Moto E6 Plus leaks in all glory