Nokia is all set to unveil its next-gen budget smartphone dubbed Nokia 7.2 at IFA 2019 next month. As the name suggests, this is going to be a successor to the previous-gen Nokia 7.1. The smartphone has already been leaked numerous times earlier but rocking 6GB of RAM underneath. Well, this time, the device has once again surfaced online and that too with the 4GB RAM. For those who’re unaware, the brand will also launch the Nokia 6.2 at the event which is scheduled for September 5. 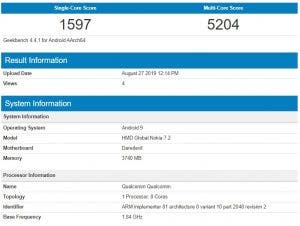 It’s not the first time that Nokia 7.2 is making its appearance on the GeekBench listing. Nokia 7.2, also known by its codenamed ‘Daredevil’, this time is spotted featuring 4GB of RAM. This means that the device will come in two memory variants – 4GB and 6GB options. The device managed to score 1597 in the single-core test and 5204 in the multi-core. These scores are very much similar to the one which we’ve seen previously with the 6GB variant. The device is also seen running the latest version of Android i.e. Android 9.0 Pie.

Sadly, the listing, apart from these, doesn’t reveal much about the time. It is worth mentioning that both the variant will run on the same chipset since the scores turn out to be pretty similar. If previous rumors are to be believed, Nokia 7.2 will sport either Snapdragon 660 or much powerful Snapdragon 710 chipset. We might see a 6.3-inch Full HD+ display with the support of HDR10 on this device. Recently, a live photo of the device got leaked revealing the waterdrop notch design. At the back, there is a triple camera module and an LED which are arranged in a circular position. The primary sensor could be the popular 48MP sensor if we consider the recent trend in the budget segment. Nokia 7.2 is supposed to feature a 3,500mAh battery with the support of the quick charge.

As of now, there is no solid information on the device’s pricing. We might see more details coming forward since the official launch is set for the next month. As mentioned earlier, Nokia 7.2 will see its official unveiling on September 5 at IFA 2019 event.