We’re several months away from the Galaxy A71 release which is rumored for sometime in Spring 2020. And we’re yet to see the Galaxy A70 getting its incremental upgrade, namely the Galaxy A70s. Despite all these facts, the next year’s smartphone has surfaced on GeekBench.

The Galaxy A71 appeared in the popular benchmark tool bearing the SM-A715F model number. The listing already reveals that the smartphone will ship with Snapdragon 675 paired with 8GB of RAM. That’s the exact same chipset that we’ll be seeing in the upcoming Galaxy A70s. If this is true, then the next year’s model won’t be an upgrade in terms of performance. Instead, it should bring improved cameras, design and incremental features. Anyway, take this with a pinch or two of salt, since GeekBench has been known for mixing processor names. 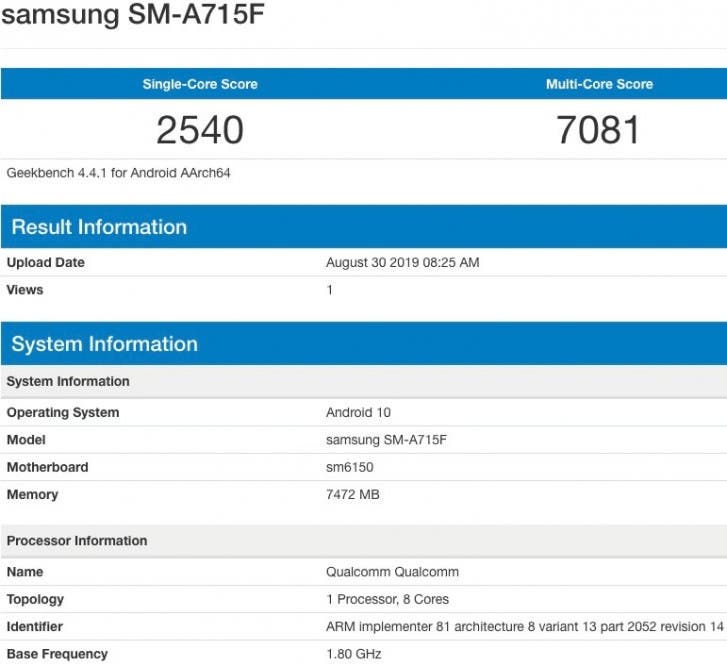 In any case, the smartphone managed to achieve a score of  2540 points on the single-core tests. When it comes to the multi-core tests it grabbed 7081 points. The results are slightly better than a recent one for the Galaxy A70s. For that reason, a Snapdragon 7-series chipset isn’t discarded. The GeekBench further reveals the presence of Android 10 with OneUI presumably running atop.

With rumors pointing to the release of A71 along with A91 few time after Galaxy S11-series launch. So don’t hold your breath for it.

Previous OnePlus TV will get three year of software support