Sony will hold a press conference to present its new products at IFA 2019 later today, but it unintentionally provided a clue to them a few hours before the event began. During the technical tests of the streaming of the event, something went wrong and the movie inserted in the Sony Europe YouTube channel became publicly visible before being made private. It was enough to capture some images of the presentation from which Xperia 5 emerged. 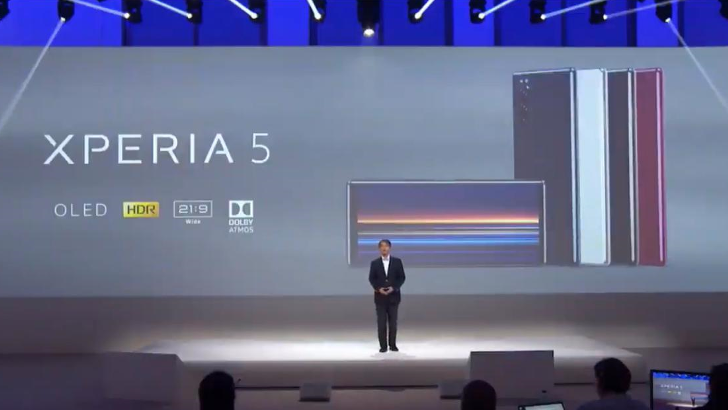 This name was never mentioned by rumors. But would identify the terminal previously known as Xperia 2 and already the subject of previous rumors. Sony would then choose to call Xperia 5 its next top range, heir to the Xperia 1. The images taken from the streaming anticipate some details on the technical features of the smartphone, especially those of the display equipped with OLED panel in 21:9 format and HDR support. We do not know the screen size yet, but the first rumors do not go in the direction of a particularly compact device. We mention the existence of Dolby Atmos audio too.

The images also confirm the triple rear camera and the reduced display frames – especially the side ones. Other information taken from the streaming.

Just for the fun of it, here's another image of the rehearsal for the #Xperia5 press conference. https://t.co/ipIX8I5dpb pic.twitter.com/sVRp972yHF

The Sony Xperia 5 will be available in four colors: black, blue, white and magenta with DualShock 4 support. The availability in Europe is set for October with the start of pre-orders set for next week.

Since they are streaming tests. It is not certain that all the information in the slides corresponds to the final product specifications. But there is not much left to see it officially.

Next Google Pixel 4: Motion Sense gestures will not work in all countries