In recent times, Xiaomi’s second 5G smartphone (Xiaomi Mi 9 5G) has been on the news. However, recent reports show that this device will have a 12GB+512GB variant. According to the TENAA listing, this new configuration adds to the previous models which have appeared on TENAA.

In view of the substantial increase in the speed of 5G technology, users will likely require more storage space. Thus, it is reasonable for Xiaomi to add a 12GB RAM and 512GB storage variant for the Xiaomi Mi 9 5G. Apart from the modifications in the RAM/ROM, other configurations remain the same. 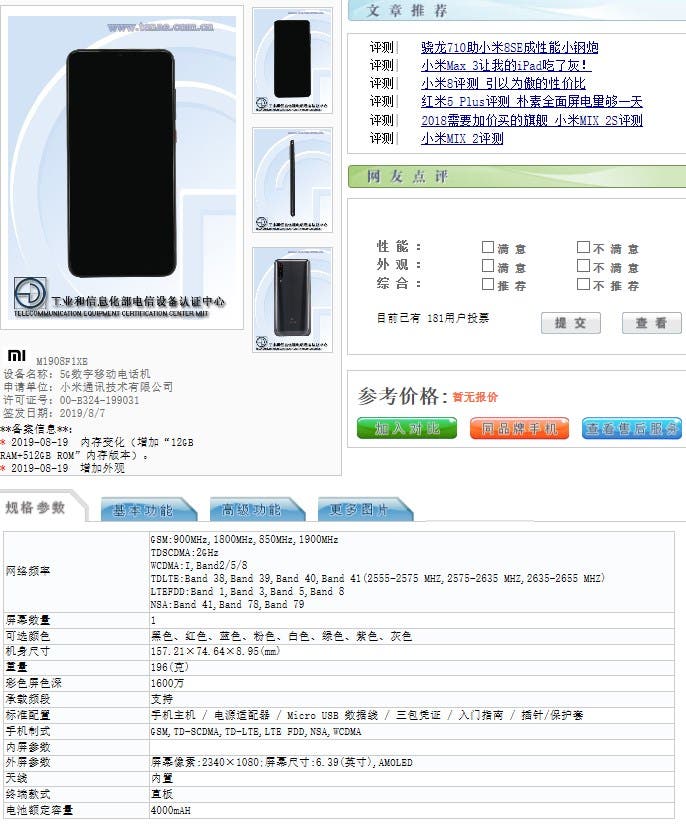 This 5G smartphone may be called Xiaomi Mi 9S. Its overall design is basically the same as that of the regular version. It uses a 6.39-inch water-drop screen and the rear camera is still a triple rear camera setup. The Xiaomi Mi 9 5G version will be powered by an SM8150 processor (SD855+) and SDX50M baseband chip, supporting 5G and 4G dual-card network. The specific dimension of this device is 157.21 mm × 74.64 mm × 8.95 mm. Recent reports suggest that the Mi 9 5G will be the cheapest 5G mobile phone in the market. As of now, iQOO Pro 5G is the cheapest 5G smartphone and it sells for 3798 yuan ($536).

The Xiaomi Mi 9S uses a bigger 4000 mAh battery which supports wired fast charge up to 45W. This smartphone will use a Snapdragon 855+ SoC and the display will be upgraded to 2K resolution. The rear camera also adds Optical Image Stabilization. For now, the Mi 9 5G may be released on September 9.