If Xiaomi wants not to fall behind, it should accelerate launching the new 5G smartphones. Of course, we know it was among the first manufacturers to come in with a 5G-enabled handset in face of the Mi MIX 3 5G, but this product is not among the top models. So something should change. And seems this will happen as soon as tomorrow. We were informed Xiaomi has already prepared its next 5G handset, namely the Xiaomi Mi 9 5G version. The latter has already managed to pass through TENAA. And now, there is every reason to think Xiaomi will uncover it tomorrow.

According to information disclosed by informed sources, the Xiaomi Mi 9 5G version will be named the Mi 9 S. And Xiaomi plans to ship over 300,000 units. But this number will change with the market. 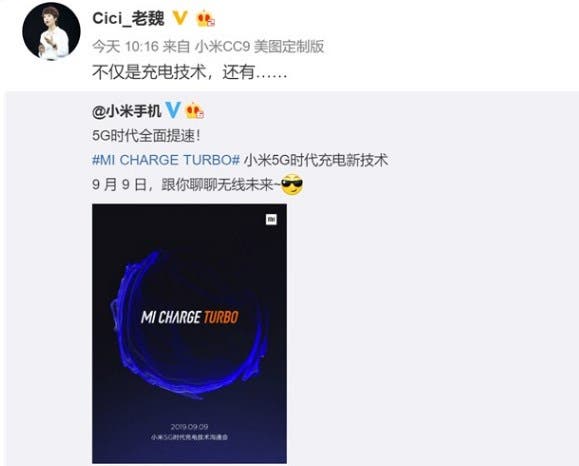 It is worth noting that tomorrow is the new technology communication meeting of Xiaomi devoted to the 5G era. Xiaomi CC product manager and brand spokesperson Lao Cici Wei also said on Weibo that they are going to announce ‘not only a charging technology, but also…’ Actually, we and many people are sure the mysterious creation of Xiaomi will be the Mi 9 5G.

According to the data of the Ministry of Industry and Information Technology, the Xiaomi Mi 9 5G version still uses a 6.39-inch screen, is equipped with an SM8150 processor (Snapdragon 855 Plus processor) and SDX50M baseband chip, supporting 5G and 4G dual-card network. At the same time, the battery capacity is increased to 4000mAh. The thickness of the fuselage has become 8.95mm.