Just like it happens every year, Google is expected to launch the new generation of Pixel smartphone in October. Last year, we’ve got the full picture of the Pixel 3 series several months before the release. This year, things aren’t so different and we already have plenty of details, although the leaks started to surface a little later. We already know the design aspects of each device and some of the specifications. However, seems that there’s still room for some surprises since a Google Pixel 4 XL 5G variant has just popped out in GeekBench (via Indiashopps).

Interesting enough seems that Google will be upping its game with this particular version of the Pixel 4 XL. Currently, we aren’t expecting more than 4GB versions of the Pixel 4 and 4 XL. However, if Google eventually releases a 6GB version of the XL variant we won’t be shocked but 8GB RAM is rather surprising. While most companies are shipping devices with more RAM every year, Google is sticking to 4GB RAM models. The search giant wants to ensure that the Android doesn’t need groundbreaking specs to perform fine in flagships. While this may be true, Pixel handsets are priced like flagships, and customers deserve the better specs they can get for the asked price. 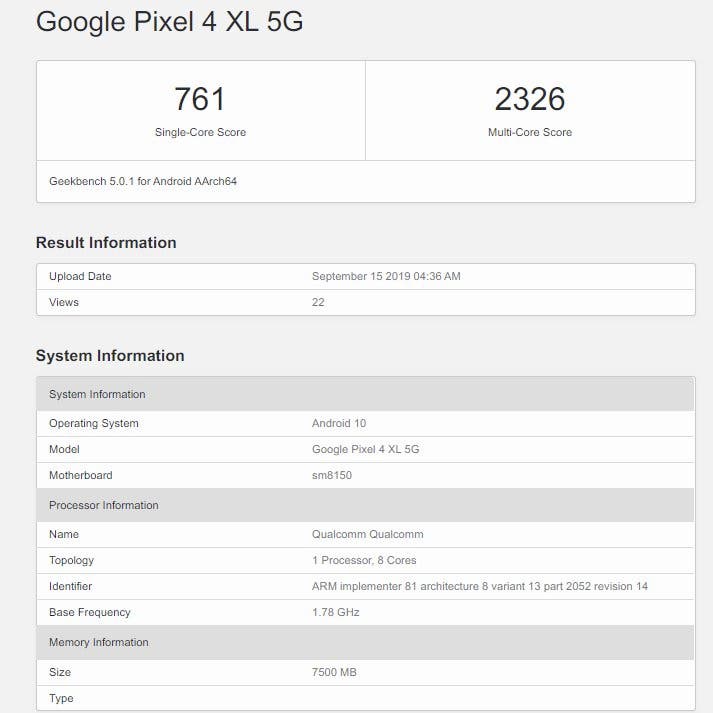 Geekbench listing suggests that this version of Pixel 4 XL will come with 8GB RAM version and the latest “5G” network capabilities. Listed in the name of “Google Pixel 4 XL 5G”, the device is equipped with sm8150 ( which could be Snapdragon 855 or 855+) SoC. Besides, it runs Android 10 straight out of the box, but that isn’t a surprise. The handset got 721 points in single-core tests and 2326 in the multi-core tasks. The results are comparable to devices like the OnePlus 7 Pro which runs the Snapdragon 855.

If the above results are accurate, the Pixel 4 XL will be the company’s first entry in the 5G world. And will also be the first Pixel smartphone to ship with 8GB of RAM. We expect at least 256GB of Storage for this particular variant. According to FCC listing, Google will ship Pixel 4 models – G020I, G020J, G020K, G020L. Although the listing at FCC does not reveal much about the devices, it seems Google has requested a new frequency band that is similar to 5G networks.

While the launch will happen as soon as in the next month, it’s too soon to make conclusions. For that reason, we recommend you to digest this news with a pinch of salt.