After numerous leaks and reports, Google finally confirmed that the newest Pixel 4 duo is coming on October 15. The invites for the launch were sent yesterday, and in the meantime, the company also started the ad campaign for the announcement. One of the digital billboards in New York’s famous Times Square has been taken over by Google, and it clearly confirms the arrival of “Coral” color variant. 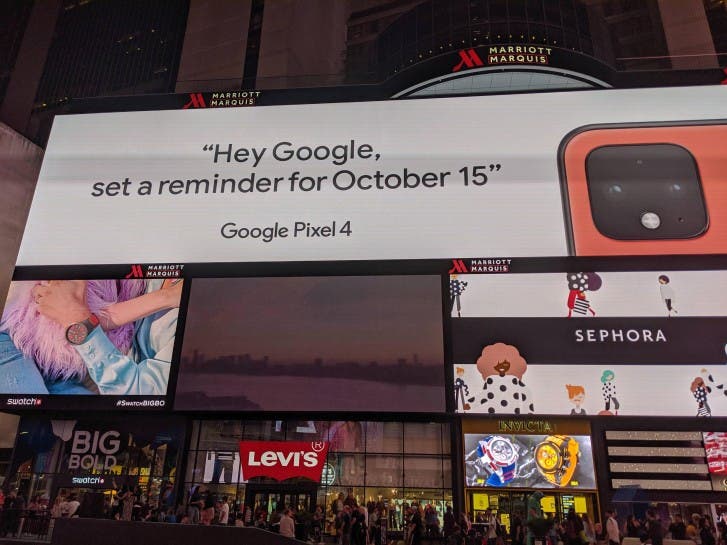 The new Coral color will probably be a hit, however, there are other two more traditional colors coming – Black and White. This particular color has been leaking a lot and now is officially confirmed. Of course, it’s not a surprise to see Pixel smartphone being a targe of leakers. To be honest seems that Google isn’t really concerned with their smartphones leaking in the wild.

What is more interesting about the billboard is that Google is also confirming the new square-ish camera island. According to reports, both Pixels will feature Snapdragon 855, 6GB of RAM and dual rear cameras. This dual setup will comprise a 12 MP main sensor along with a 16 MP telephoto one. The smaller Pixel 4 will ship 5.7″ 90Hz 1080p+ OLED display and a really disappointing 2,800 mAh battery. The Pixel 4 XL in counterpart will feature a 6.3″ 90Hz 1440p+ OLED panel and a larger 3,700 mAh cell. Worth noting that the Pixel 4 XL will also get a 5G variant with 8GB of RAM. However, we can’t confirm if it will be ready for the October 15 announcement.