Chinese manufacturing giant, Xiaomi, will have a massive launch event on September 24th where the company will unveil a couple of products. One such device is the Xiaomi Mi 9 Pro 5G which is the company’s second 5G smartphone. Yesterday, the company released a poster which shows that the Mi 9 Pro 5G will support Mi Charge Turbo – a 30W wireless fast charge technology. This tech also supports 10W wireless reverse charging. Thus we already know that the Xiaomi Mi 9 Pro 5G will come with 30W wireless and 10W wireless reverse charging. What we didn’t know was its wired charging capacity. 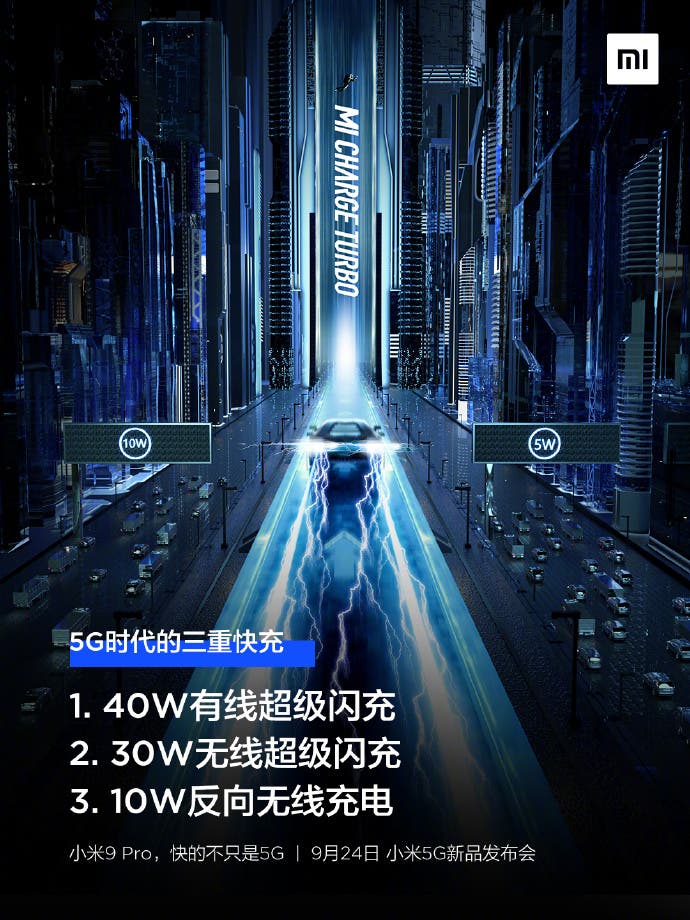 According to a new poster from Xiaomi, this smartphone will come with a 40W wired fast charging. This is much higher than the 27W wired fast charge which the flagship Xiaomi Mi 9 uses. However, it is still behind the likes of Vivo’s 44W and OPPO’s new 65W fast charging. This smartphone will come with a Qualcomm Snapdragon 855+ SoC coupled with 12GB of RAM and 512GB of internal storage. The battery capacity should be about 4,000 mAh.

In addition to its second 5G smartphone, Xiaomi will also unveil the Xiaomi Mi MIX 4. This smartphone should also support 5G and may come with a 100MP sensor. Also due for an announcement at the event is Xiaomi Mi TV and MIUI 11.