The OPPO Reno Ace is OPPO’s upcoming smartphone model and the sequel to the Reno 2 series. The device arrives in a few weeks time, and as usual, we will be feed with some handy in the days before the debut thanks to official teasers, and rumors coming from the Chinese social network Weibo.

The Reno Ace already received the needed green light from TENAA, and now, a leaked promotional poster of the device has surfaced with some bit of information.

First off, the poster confirms the presence of a Quad-camera setup on the rear panel. The cameras are vertically positioned on the upper top with a flashlight beside it, while there is the OPPO branding down there. Furthermore, the poster reveals two color variants – a Blue and Green option both having a gradient effect, though there might be more color variants. The front camera is in a  water-drop notch and not a pop-up module.

It also confirms that the smartphone will be powered by Qualcomm Snapdragon 855 Plus octa-core processor, a 90hz display with support for a 65W SuperVOOC 2.0 fast charging technology which is hardly surprising given that the company has already earlier confirmed this. 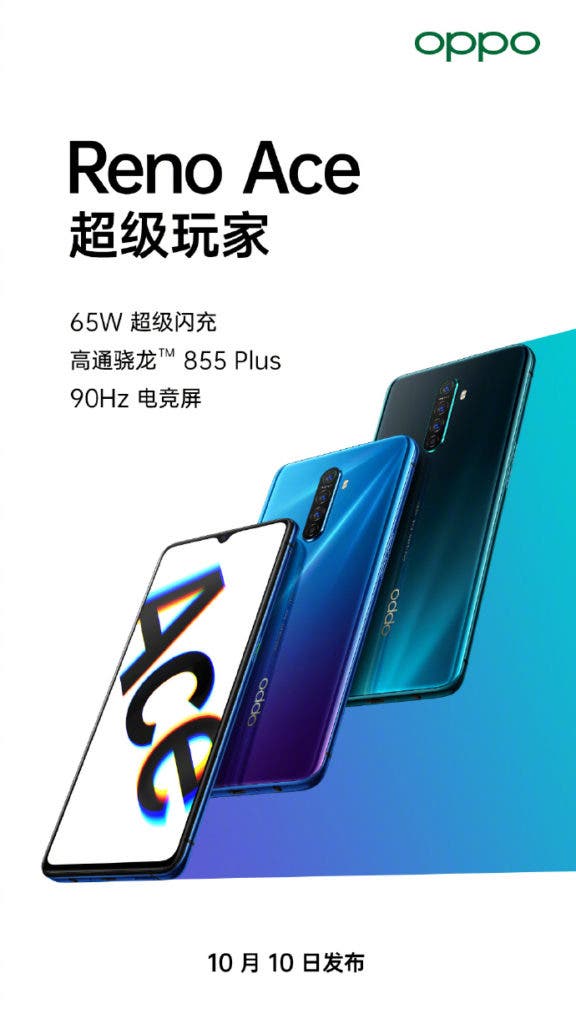 Moving on to the TENAA listing,  an alleged Oppo PCLM10 had earlier surfaced on TENAA flaunting a 6.5-inch AMOLED panel with a 2400 x 1080 pixel resolution, and Snapdragon 855+, paired with 12GB of RAM and 256GB of built-in storage. This same device launches later next month as the OPPO Reno Ace if reports are any indication.

The Quad-camera system consisting of a 48MP + 13MP + 8MP + 2MP with a LED flash by the side. And within the notch, there is a single 16MP selfie snapper and an in-display fingerprint sensor