It appears that Redmi’s latest entry-level smartphone – the Redmi 8A will be hitting the Chinese market pretty soon. We say so because the brand’s General Manager Lu Weibing earlier today dropped a subtle hint that suggests so. Although no direct mention of the Redmi 8A, the GM  Weibing revealed via a Weibo post that new Redmi phone with a 5,000mAh battery will be arriving the Chinese smartphone market soon.

Lu Weibing in a separate post further hinted that the said device is an entry-level smartphone with attractive features such as big screen, large battery life, large memory, beautiful and thin design, USB-C slot and more. Now, those specs apparently fit the Redmi 8A.

LU did not reveal the launch date of the device, however, chances are that the brand will reveal the exact date it will be dropping the device. Aside from the Redmi 8A, reports are rife that the Redmi 8, and Redmi 8 Pro will both tag alongside the device whenever it launches in China soon. 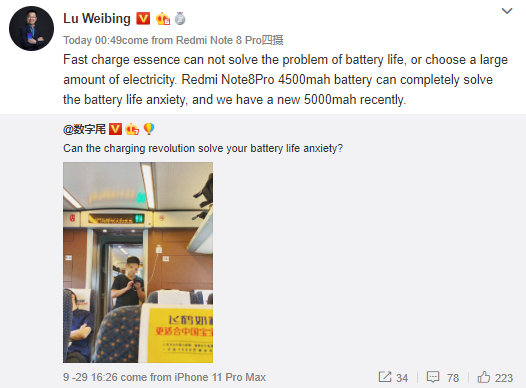 Featuring a new Aura Wave grip design, the Redmi8A highlights a 5,000 mAh battery rechargeable over a Type-C port with support for up to 18W fast charger, even though you only a 10W adapter in the box. The phone is also splash proof with a P2i rating and comes with an IR port, 3.5mm headphone jack, and dual SIM support. You can check out the full specs and pricing details here.

Previous Honor 9X is getting a Icelandic White color option

Next iPhone 11 will be as popular as the iPhone 6 in India, according to analysts