Samsung is a manufacturer that acts at 360° in the world of technology. And one of the aspects in which it is most active is certainly that of mobile devices. Its innovation comes mainly from the patents it deposits, and in this regard today we talk about one of the latest technological findings that could materialize in its next smartphones.

Everything comes from a patent filed, and published last September 26th, by the South Korean manufacturer at the US UPSTO and the WIPO. The document attests that Samsung has technologically designed a smartphone with an integrated infrared spectrometer. A spectrometer is, broadly speaking, a device that allows evaluating the nature of the constituent material of the objects that it analyzes. For example it could estimate the quantity of sugars in a fruit. Estimate the hydration of the skin or establish the level of oxygen in our blood.

The spectrometry is not magic and is based on a chemical-physical principle. The spectrometer emits a light radiation towards an object, which according to its chemical and physical conformation absorbs in a certain way the aforementioned radiation. The object, or rather the material that constitutes it, can reflect or absorb part of the radiation, providing the observer with a sort of easily recognizable “fingerprint”. 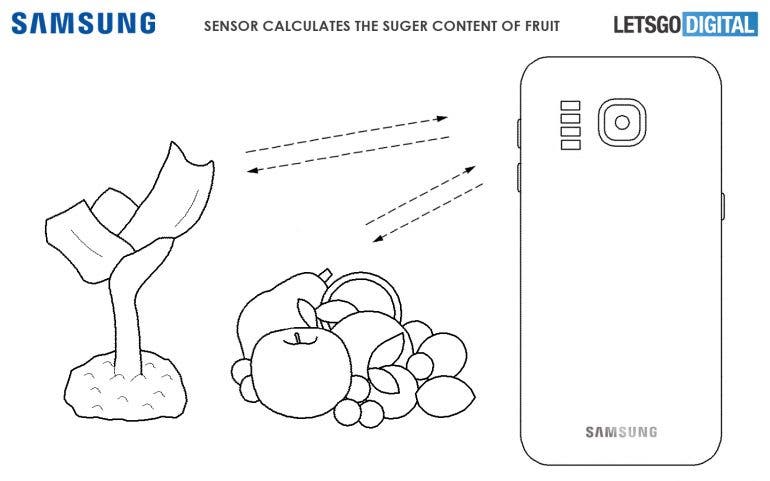 Samsung Smartphone with a spectrometer

According to LetsGoDigital, Samsung has thought of the integration of such a device in a smartphone. The block diagram reported in the patent clarifies that the source of the light radiation would correspond to two LEDs activated by the relative photodiode. Coupled to two detectors capable of detecting the portion of radiation reflected light. By evaluating, via software, the portion of reflected radiation, it will be possible to estimate the physical and chemical parameters of the object framed. Arriving where possible also to determine its nature.

How useful would a sensor like this be in a smartphone? Surely it would be an important step forward in terms of monitoring physical activity. As well as a valid tool for evaluating the food we are about to eat. On the other hand, the accuracy of the instrument will play a fundamental role. It is a spectrometry technique based only on the reflection of the radiation. And, in some cases, could be inadequate. Because it does not consider the refracted portion.

In any case, it would not be a first time for a smartphone. In 2017 the Chinese company Changhong presented a smartphone. With integrated spectrometer at CES in Las Vegas.

Hard to say at the moment if and when Samsung will want to use this new patent. Even more difficult to say if it wants to use it in its next top of the range. The Galaxy S11 that we will probably see at the beginning of 2020. For more information on the patent, we suggest you consult the original document available at this address.