Oppo has a small surprise in store for the upcoming event on October 10th. Alongside Reno Ace, in fact, it will also debut a variant born of the collaboration between the Chinese brand and Gundam, a franchise of the famous Japanese giant robots created by Yoshiyuki Tomino and Sunrise. The VP of Oppo Shen Yiren revealed this.

Although the exact name has not been officially mentioned, it is possible to assume that the smartphone can be called Oppo Reno Ace Gundam Edition. Already in May it was anticipated that as part of this collaboration Oppo would launch a smartphone in a special edition. 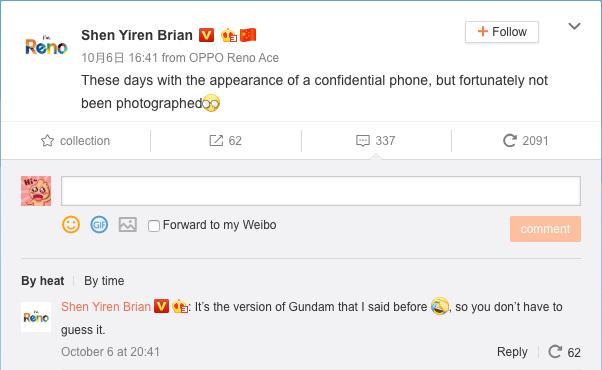 The datasheet includes the SoC Snapdragon 855 and up to 12GB of RAM. Along with 128 GB of internal memory and four rear cameras. Including 48MP (Sony IMX586) + 13MP + 8MP + 2MP. Finally, the 4,000 mAh battery will be able to support the new 65W SuperVOOC fast charging technology announced in September.