The Moto G8 Plus that should be going official in a few hours time has just made it through Geekbench which, fortunately, is the first concrete proof that shows the device is real.

The smartphone runs Android Pie, with 4GB RAM, and is powered by “trinket” which we all know to be the codename for the octa-core Qualcomm Snapdragon SoC. The Mi CC9e from Xiaomi, as well as the Realme 5 before their launch also took the Geekbench test with the same “trinket” SoC. As for the benchmark scores, the smartphone recorded 1264 points in the multi-core test and 314 points in the multi-core test. Besides the Moto G8 Plus, the Moto G8 Play, and vanilla Moto G8 are both also in the making but have yet to surface on Geekbench. 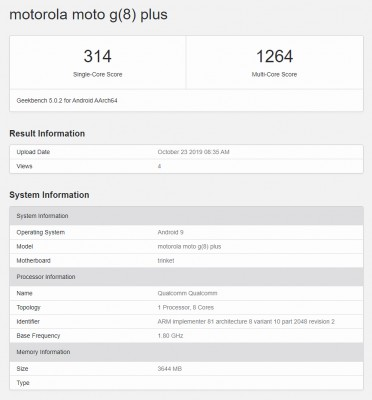 The Lenovo owned brand hasn’t divulged anything about the Moto G8 Plus, G8, or even the G8 Play. However, we have come across some leaked renders/images that suggest the Moto G8 Plus could come with a metal glass build with a notch on the front for a 25MP selfie camera.

Around the back, the device is home to a fingerprint scanner and a laser auto-focus with a triple camera setup. The camera comprises a 48MP main camera, a 16MP ultrawide “action cam” like on the Moto One Action, as well as a 5MP depth sensor. It will come fitted with a 6.3-inch FHD IPS LCD display, while power will be supplied by a 4000mAh battery rechargeable via Turbo Power Charge