Alphabet, the parent company of Google, has just released its financial results for the third quarter of 2019. The American giant is still revealing huge numbers still difficult to apprehend for the human brain. The Mountain View company thus reaped a turnover of 40,49 billion dollars between the beginning of July and the end of September. This represents an increase of 20% compared to the same period of last year.

Operating profit for its part is much less important, but remains very impressive at 9.17 billion dollars. Alphabet could cringe, however, looking at its net profit of $7.06 billion. This is down 23.1% from the same period last year. 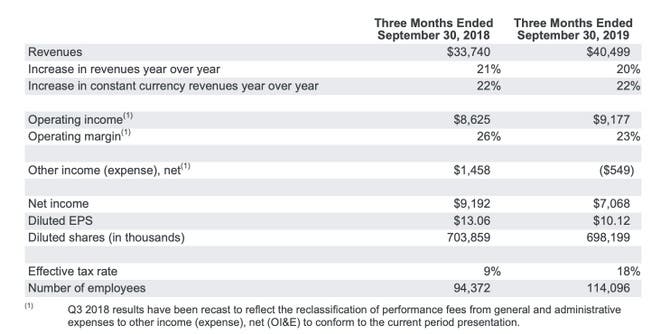 Despite this, Alphabet always surprises us with its very good financial results. While the multinational continues to spend without counting on its most ambitious and often wildest projects. As always, the company refers to it under a rather sober title: “other bets”.

In the third quarter of 2019, there were 941 million dollars of deficit that were generated by these other bets. But as we have seen above, this loss has no major impact on the finances of Alphabet.

“Our effort to build a more helpful Google for everyone brings countless opportunities to help users, partners, and enterprise customers every day,” said Sundar Pichai, Chief Executive Officer of Google.

“I am extremely pleased with the progress we have made in all areas during the third quarter. Whether it is our recent advances in research and quantum computing. Or the strong growth in our revenues driven by mobile search, YouTube and the cloud.” said Sundar Pichai, the boss of Google.