After the immense success of Band 3 Pro, Huawei is now working on its successor dubbed Huawei Band 4 Pro. A couple of days ago, the smartphone maker unveiled its non-pro variant of the fitness band which features color display along with USB Type-A for charging. Well, we now have the very first leak of the upcoming Band 4 Pro. This time we’re looking at the design as well as color variants of the product. 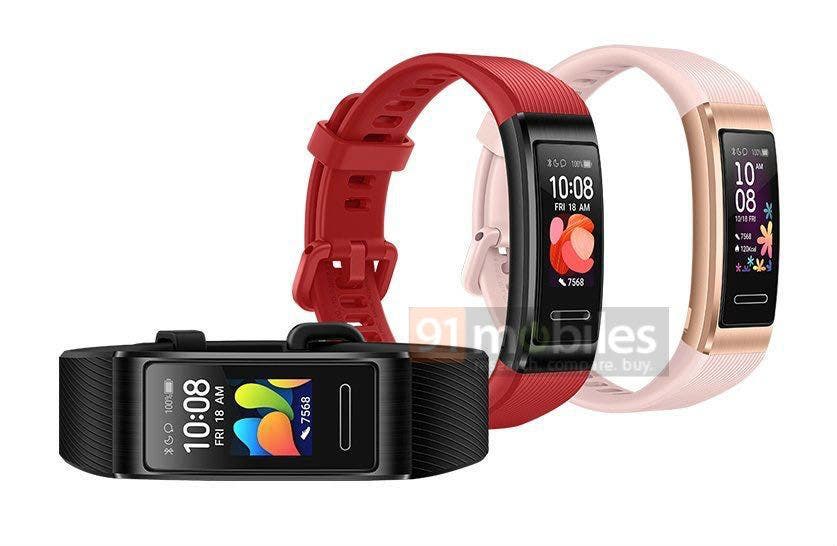 Thanks to the recent emerging report, we now have the leaked render images of the product. The render images reveal various key aspects of the device. As you can see from the image, the fitness tracker looks very much similar to its predecessor. We’re expecting a similar form factor along with silicon strap. This design falls in line with the patent that surfaced back in September.

Like the Band 3 Pro, the fitness band will come with a color AMOLED display along with a touch-sensitive button. The images show thick chin as well as bezels all around the display. It seems like the Band 4 Pro will come with new wallpapers and 10 different watch faces. Furthermore, the band will come in three different color variants namely Black, Red, and Gold. As expected, the straps will be interchangeable along with multiple adjustment holes for a comfortable fit.

Unfortunately, this report doesn’t reveal much about the specifications of the product. Looking at the previous leaks and rumors, Huawei Band 4 Pro will feature an AMOLED screen along with an in-built heart rate sensor and SpO2 meter to measure oxygen levels in the blood. Like the recently launched Band 4, we might see the brand going with the USB Type-A port for charging instead of the proprietor charging connector.

Considering that Band 4 which recently launched, the smartphone maker might make the Band 4 Pro official in the coming months.

Next Xiaomi's Mi watch surfaces in live demo, can run apps like WeChat and Alipay