Alongside drip-feeding us with details of its 108-megapixel phone set to be unveiled at its November 5th event, Xiaomi has also been dropping details of its upcoming smartwatch which awfully looks similar to the Apple Watch. The brand isn’t new to the cloning of Apple products, so we aren’t really surprising seeing it copy the Apple watch for the Mi Watch.

Xiaomi has confirmed the Xioami Watch / the Mi Watch will come equipped with a Qualcomm Snapdragon Wear 3100, and independently supports WiFi, GPS, and NFC, plus an eSIM, so you can independently make voice calls via the device.

Further revealing some key details, Xiaomi through the general manager of Xiaomi Ecological Chain, shared the real-life demonstration video of him watching viewing online video on the Mi Watch. Furthermore, the demo by Qu Heng also revealed that the Xiaomi Watch can run apps such as Sogou map, WeChat, Alipay, Himalayan, navigator, vibrato and many other programs. Do note, however, that due to the limited screen and storage sizes, the Xiaomi watch might not support the installation of regular Android apps. So these apps are basically the lightweight versions of the regular Android Apps.

A separate teaser poster as seen on Weibo also suggests the Mi Watch can also control smart home devices,  while you can also view your fitness data right from the Mi smartwatch. 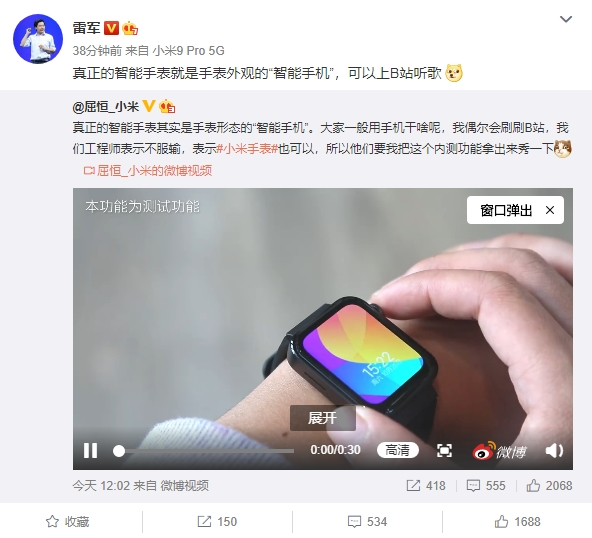 Besides the Mi Watch,  the Xiaomi Mi CC9 Pro, as well as the Xiaomi Mi TV 5 series are also to go official on November 5th. The Mi CC9 Pro by far will be the highlights of the Nov3mber 5th event, as it will come studded with a Penta-camera setup, and more importantly a 108MP main camera sensor. The Mi TV 5 series, on the other hand, will be Xiaomi’s answer to the recently unveiled Oneplus TV. It has a 4K Quantum Dot QLED display.

Next WhatsApp: A company has created a malware to spy on messages