A Motorola smartphone with a pop-up camera setup may soon become a reality, as speculated a few weeks ago. Motorola hasn’t confirmed the existence or not of the device, but we could say the device dubbed the Motorola One Hyper is a step closer to its official launch.

The NBTC in Thailand has not cleared the device to launch in the country. The listing officially confirms the Motorola One Hyper moniker, but sadly doesn’t dwell on the handsets’ specs, but does suggest its official debut might not be far off.

Speaking of the specs, and internal details, reports from a few weeks back say the Motorola One Hyper will launch as Motorola’s first smartphone with a pop-up camera module. It features a 6.39″ notch-less IPS LCD display having FHD+ resolution. It will be powered by a Snapdragon 675 SoC with 4GB RAM and 128GB storage, while a 3,600 mAh battery will keep the light on.

Designwise, the device is free of any notch with a full-screen design, all thanks to its pop-up camera module housing a 32-megapixel selfie camera with an f/2.0 lens. It gets a fingerprint scanner under, as well as a dual-camera setup on the flip side.

And speaking of camera details, reports say the device will get a 64-megapixel primary camera on the back with an f/1.8 lens, coupled with an 8-megapixel depth-sensing camera with an f/2.2 aperture. It can record 4K videos at 30fps, full-HD videos at up to 60fps, slo-mo videos at 120fps in 1080p resolution and at 240fps in 720p resolution. Also, the device has a dedicated Night Vision mode for low-light photography. 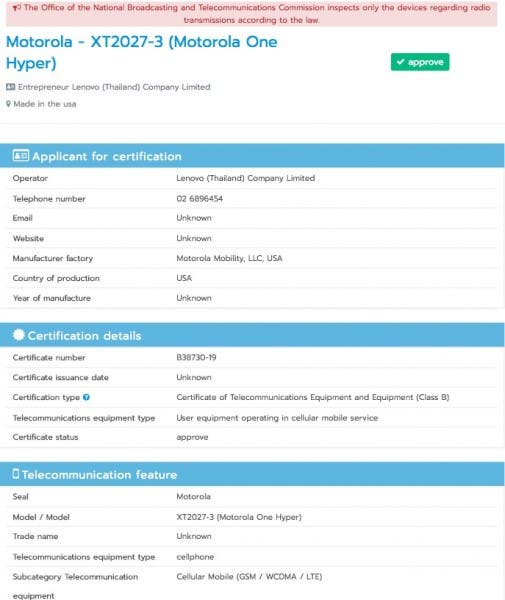 It is not clear when Motorola intends to unveil the device, though there are speculations it could tag alongside the Foldable Razr phone at the company’s  November 13 in Los Angeles. We would have to await more details from the Lenovo owned brand.

Next Xiaomi CC9 Pro will launch with "RUOK" protective case