According to recent reports, Xiaomi will officially enter the Japanese smartphone market in 2020. However, there is no report on the specific models to arrive in Japan. The director of Xiaomi’s mobile phone product marketing, Xiao Zhiyuan, confirmed this report in a recent Weibo post. As of now, Xiaomi is available in many countries and regions around the world, with footprints in Asia, Europe, Africa, North America, and South America. 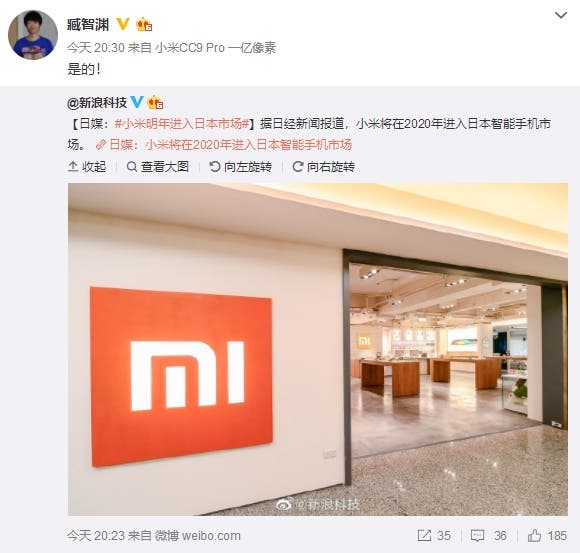 Just last month, Xiaomi opened its official Japanese publicity Twitter account. This shows that the company will soon arrive in the country. Other Chinese mobile phone brands such as Huawei, ZTE, and OPPO are already in the Japanese market.

The Japanese consumer market is relatively small and they have preference for local brands. Foreign brands, especially electronic consumer brands, are difficult to cut in. It is difficult to accept more advanced electronic products. However, the Xiaomi smartphone business will try to carve a niche for itself in Japan.

In the mobile phone market, Japan once owned famous mobile phone brands such as Sony, Sharp, Panasonic, Sanyo, etc. However, the Japanese mobile phone industry was dominated by operators. After the rise of smartphone OEMs, Japan did not follow suit. Thus, the likes of Sharp and Sony are now far behind in the phone manufacturing industry.

Next Xiaomi TV 5 Real Photos Leaked Ahead Of Launch