Just barely 24 hours after it released the rating for Apple iPhone 11 Pro Max, DxOMark has been under fire probably from Apple loyalists. Although, the iPhone 11 Pro Max image score of 124 tops the chart, its 102 video score saw that this smartphone got a 117 overall score to rank third behind Huawei Mate 30 Pro and Xiaomi Mi Note 10. Yesterday, there were questions about DxOMarks settings in the video recording.

It had to explain that “by default, the iPhone 11 Pro Max records video at 30 frames per second at 1080p full HD resolution. However, it achieves the best recording results at 4K resolution. Therefore, starting November 1, 2019, all DxOMark Camera and Selfie video tests will use the best video quality settings…(whether or not the setting is the default mode)”. Now, there is even a more serious allegation about DxOMark ratings. 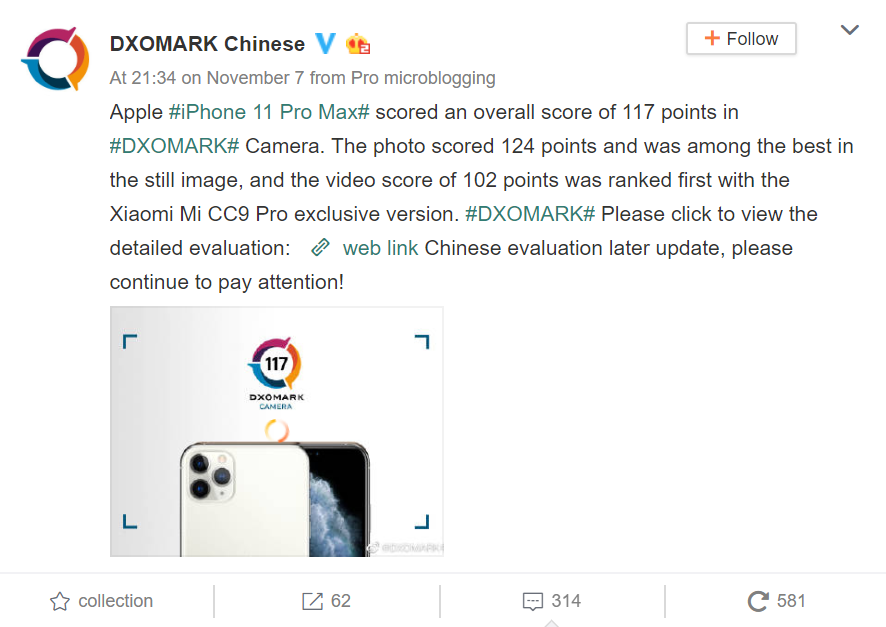 There are questions about DxOMark “rating” with “consulting”. Stephen Warwick and Rene Ritchie wrote on iMore

“While camera testing is subjective, DXOMARK has also been criticized for the apparently arbitrary and mercurial nature of their scale. So, take any numbers they offer, whether the iPhone is the higher or lowest any given Thursday, with a moneybag-sized grain of salt. We’re only covering it because so many others have somehow decided to cover it but without the context needed to make an informed decision about how much weight to give to them… if any”.

The also drew out the following points

This seem to accuse DxOMark of influencing its score when there is a “moneybag-sized grain of salt”. As of now, there is no official response from DxOMark on this jab. While this is not a direct accusation, it is a criticism that certainly needs some sort of response.

No doubt, there is obviously a “conflict of interest” by offering consultancy. Nevertheless, we can not deny the fact that DxOMARK’s reviews are extensively detailed with a reason(s) for every decision. DxOMark’s presentation lends credence to its objectivity. I think in recent years, Apple has lost track of the competition and it is struggling to get back in the game in some aspects. It obviously needs its “loyal fan base” to push things to better heights.

Next Sony teases IMX686 image sensor, to debut in early 2020