Mark Zuckerberg seems to follow closely the successful TikTok application, to the point of having created his own account. A BuzzFeed article revealed that in 2016, Facebook was negotiating to buy Musical.ly, the lip-syncing app that then gave birth to TikTok. The discussions were unsuccessful and in 2017. Musical.ly was bought by the Chinese tech giant, ByteDance, and merged with its short video app Douyin to form TikTok.

BuzzFeed found what seems to be Mark Zuckerberg’s personal TikTok account, with the identifier ‘@finkd’. The account is not certified on TikTok, but it is linked to Mark Zuckerberg’s Instagram account. Mark Zuckerberg also uses the @finkd ID on his inactive Twitter account. Facebook did not comment on this information when Business Insider US contacted the company. It seems that Mark Zuckerberg is only a ghost on TikTok. His account only has 4,055 subscribers and has no activity, no video posted, no video liked. 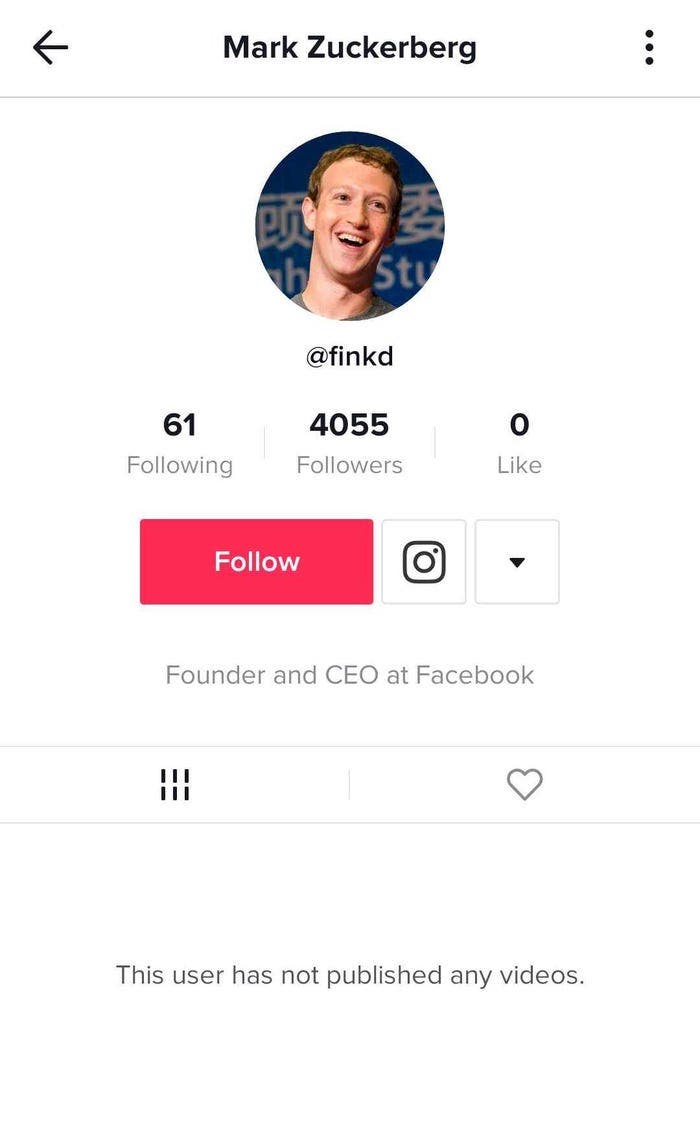 Mark Zuckerberg only follows 61 accounts, all certified accounts of popular creators, with the exception of three people. In Mark Zuckerberg’s subscriptions, there is a mix of celebrities, official accounts and teenagers from TikTok – who make up the majority of the social network, including Ariana Grande, Loren Gray, and Jason Derulo.

TikTok has become a major threat to Facebook, becoming the favorite application of Generation Z, as the Facebook user base ages and its commitment decreases.

Mark Zuckerberg has already spoken about TikTok’s competition for Facebook. In leaked audio recordings, he explained that Facebook’s strategy to keep up with this new fashionable social network is to focus on new markets where TikTok is not yet present.

It is worth to mention that according to Sensor Tower data, TikTok has already been downloaded more than 1.5 billion times, with 614 million downloads in 2019.

On the distribution side, TikTok is particularly popular in China and India. With no less than 277.6 million downloads on this territory in 2019. According to various analysts, the application would have already returned more than 175 million dollars. To its creators via the App Store and Google Play Store. This revenue has largely come from China (48.3%), with the U.S. (35.7%), and the U.K. (3.9%) coming in second and third position. A massive $115.3 million of the $175 million was got this year alone.

Previous Chrome for Android: opening and closing tabs become easier than ever

Next Honor V30 design confirmed in a leaked press images