Huawei is all set to introduce its next-gen premium tablet dubbed Huawei MatePad Pro in its homeland i.e. China. The tablet has already been leaked numerous times before revealing bits of information every single time. We are already aware of the fact that the device will come with thin bezels, stylus support, and a massive 40W fast charging. Furthermore, the tablet is also expected to come with a punch-hole camera on the front. After bagging the 3C and TENAA certification, the tablet has finally made its way to the GeekBench listing. 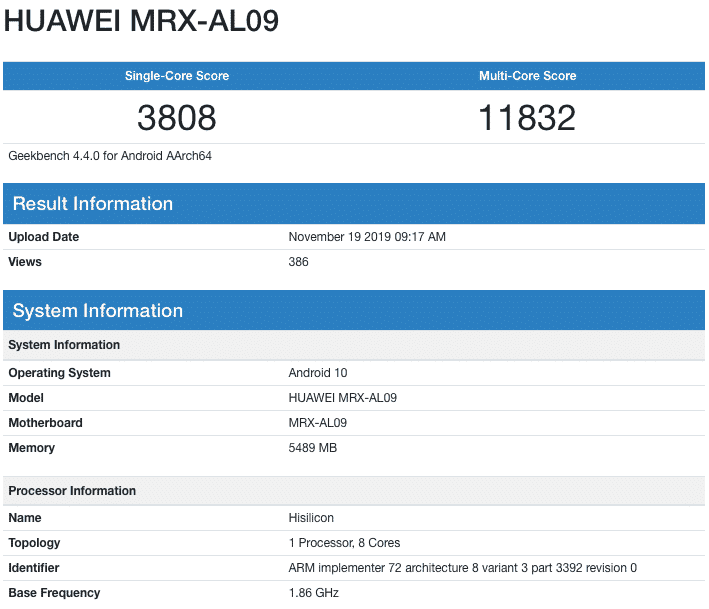 The GeekBench listing of Huawei MatePad Pro shows the model number MRX-AL09. As per the listing, the tablet will run on the latest version of the Android 10 operating system. Under the hood, the device is powered by an octa-core HiSilicon processor clocked at 1.8GHz. This information points towards the Kirin 990 chipset which we recently saw in the Mate 30 Pro. As of now, there is no information on the internal memory but the device seems to come packed with a massive 6GB RAM. Coming to the scores, the tablet managed to get 3808 points on single-core and 11832 on multi-core performance.

Apart from the GeekBench, the device also managed to make its way to the Bluetooth SIG listing revealing more model numbers. The revealed model number includes MRX-AL09, MRX-W09, MRX-L00, and MRX-AN09. It is already confirmed that the tablet will come in WiFi-only and 4G LTE variants as well. Furthermore, the model number MRX-AN09 suggests that the device might also come with a 5G connectivity option.

At the time of writing this article, there is no solid information on pricing and availability. As mentioned earlier, the tablet will first hit the Chinese market with its official unveiling set for November 25. In the near future, we might see the tablet hitting the other global major markets.