Vivo recently unveiled the Vivo S5 in China with a diamond-shaped camera layout. Now, the company has listed the Vivo S1 Pro in the Philippines with a similar camera setup. It is priced at PHP 15,999 for the sole 8GB + 128GB variant.

The new Vivo S1 Pro for the Philippines is powered by Qualcomm Snapdragon 665, a step-down from the Snapdragon 675 found on the Chinese variant. It will be available only in 8GB RAM and 128GB ROM configuration, at least for now. On the front, it sports a 6.38-inch FHD+(1080 x 2340 pixels) Super AMOLED display with a waterdrop notch to accommodate a 32MP camera for selfies and video calls. In contrast, the Chinese variant features a pop-up module for the front camera and thus offers a full-screen experience without any obstruction. 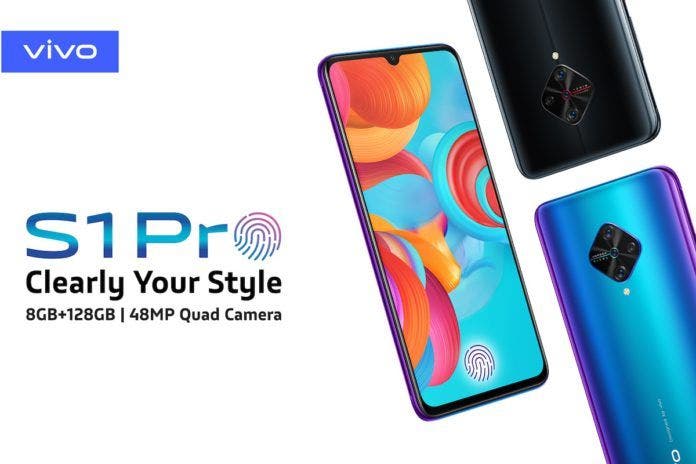 The back of the phone features the same design as the recently launched Vivo S5 in China. And hence, the four rear cameras and LED flash are placed in a diamond pattern. The quad-camera setup consists of a 48MP primary sensor with f/1.8 aperture lens and an 8MP sensor with f/2.2 aperture ultra-wide-angle lens which can output images with a 108-degree field of view. The other two sensors include a 2MP depth-sensing unit and another 2MP with f/2.4 aperture macro lens.

The  Vivo S1 Pro runs FuntouchOS 9.2 based on Android 9.0 Pie and also has microSD card slot to further expand the storage up to 256GB. It also has a 3.5mm headphone jack(uncommon these days) and an in-screen fingerprint sensor which has now become a norm. Lastly, a 4,500mAh battery runs the device with support for 18W fast charging via USB Type-C port.

As mentioned earlier, it will retail for PHP 15,999 (roughly $314) in the country of Philippines. The company is yet to announce their plans for other markets.

Next Xiaomi TV 5 series to get video call feature soon