Market research firm, Canalys, recently released its Q3 2019 European smartphone market share rankings. According to its results, ranked Samsung still ranks first with a 35.7% market share. However, embattled Huawei is second with a 22.2% market share. After the ban on Huawei, its latest flagship (Mate 30 series) comes without Google Mobile Services. Without GMS, Huawei smartphones are a NO for Europe. Nevertheless, the company still managed to ship 11.6 million smartphones for Q3 2019. This means that it was only 100,000 units short of what it got in Q3 2018. 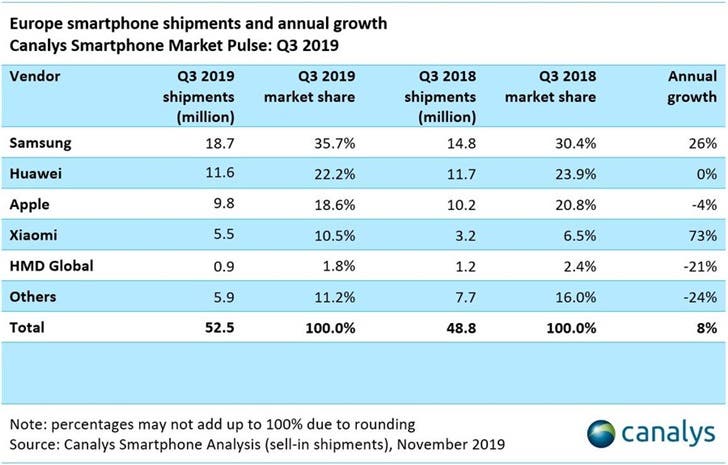 In addition, Apple, Xiaomi and HMD came third, fourth and fifth with 18.6%, 10.5%, and 1.8% respectively. In terms of smartphone shipments, Samsung has 18.7 million while Huawei shipped 11.6 million units. Apple, Xiaomi and HMD shipped 9.8 million, 5.5 million, and 900,000 units respectively. According to the report, in Q3 2019, Europe is the fastest-growing smartphone market globally. Its shipment grows at an annual rate of 8%.

For Huawei mobile phones, the Huawei Mate 30 series is still on sale in the European market despite the lack of GMS. However, according to the latest report from Canalys, Huawei’s shipments in Europe have rebounded to 11.6 million units in the third quarter, a surge of nearly 36.5% from the second quarter. Canalys pointed out that Huawei’s growth momentum in Europe in Q3 2019 was mainly from Central Europe and Eastern Europe. Shipments in these regions increased by 26% compared with the same period last year while shipments in Western Europe fell by 17%.

Next Huawei MateBook D 14 & 15 Announced, Both with Intel & Ryzen CPUs