Just yesterday, Oppo’s Vice President, Brian Shen, shared the first-ever render of the upcoming  Oppo Reno 3 Pro 5G. And today, we get to see the complete front design of the said phone in the form of another render, courtesy of LetsGoDigital.

Oppo Reno 3 Pro will be first in the series to ditch the pop-up shark-fin camera module according to the new render which surfaced on the web today. Instead, it will feature a punch-hole camera on the extreme top left corner of the display. Going by the render, the bezels on the top and the bottom of the phone will be slightly larger than the previous generation but it will be equal. Also, the screen will be curved on either side like the flagship Samsung Galaxy. 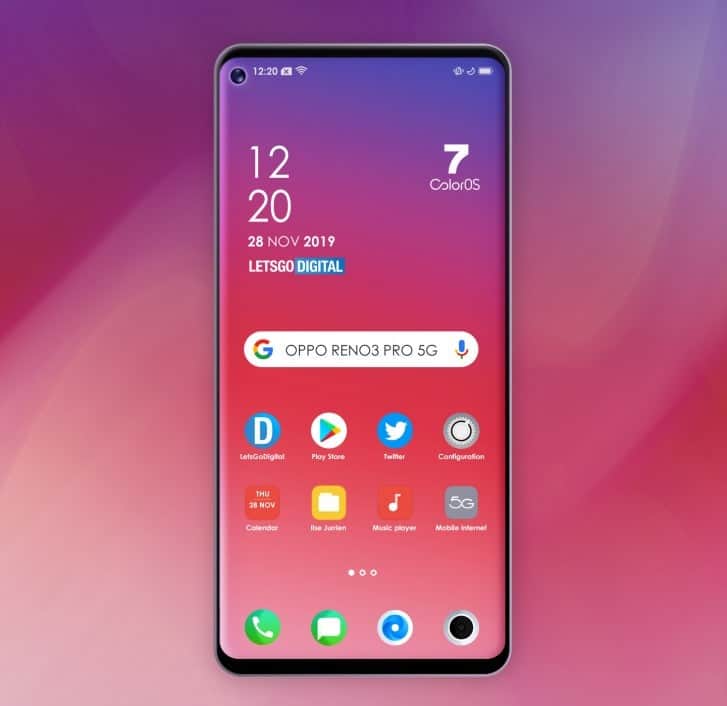 According to Brian Shen, the Reno 3 Pro 5 from Oppo will be the company’s first as well as thinnest dual-mode(Standalone / Non-standalone) 5G smartphone with 7.7mm thickness. He also added that it will come with a 4,025mAh battery ensuring commentators sceptical about the battery capacity.

In answer to some comments – OPPO Reno3 Pro 5G has a 4025mAh battery, matching users needs of power and speed even with it's thickness of 7.7mm. 🤓

As per previous leaks, the phone will be powered by Qualcomm’s yet unannounced Snapdragon 735 and also boast a 90Hz AMOLED panel. It is also expected to feature quad-camera setup with Sony’s new 60MP camera sensor and a 32MP front shooter. Oppo is yet to announce the launch event for Reno 3 Pro 5G.

Next These Are the Best Camera Phones of 2019, According to DxOMark