In the 5G era, Nokia is one of the power houses especially for regions where Huawei’s ban is active. According to HMD Global’s CPO, Juho Sarvikas, the company will announce its plans for 5G phones at the Qualcomm Snapdragon Technology Summit. 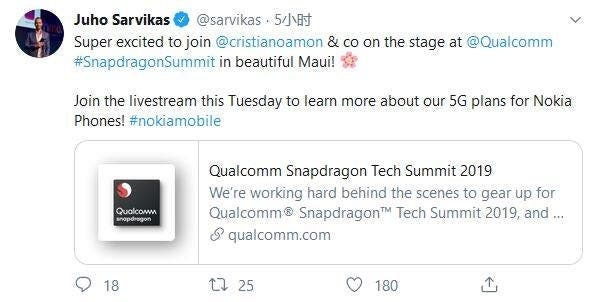 Qualcomm will hold its Snapdragon’s annual technology summit from December 3rd through December 6th. At each session of the Summit, there will be unveiling of new generation products and technologies. Qualcomm’s 2019 flagship chip, Snapdragon 865, will most likely make an appearance at this summit.

Based on the current information, Nokia ’s first 5G mobile phone model is Nokia 8.2. This phone will come with Qualcomm Snapdragon 735 processor. As for the camera, Nokia 8.2 will use a 32MP pop-up front camera while the rear will have a quad-camera configuration with a 64MP main shooter. Finally, it is expected that Nokia’s first 5G mobile phone will be officially released next year at MWC 2020.

Next Huawei Enjoy 10S Going on Sale on December 5th