Vivo is all set to launch the V17 in India. Ahead of the launch, we have a new official poster leak that reiterates a previous leak from two days back. The poster leak, courtesy of 91Mobiles, once again confirms a punch-hole display in line with the render leak. The V17 is already official in Russia, however, it was launched with a different design than the one that is about to debut in India.

Lately, Vivo has been re-branding their smartphones for different regions confusing a whole lot of people, especially smartphone enthusiasts. Though they launch the phones with a same moniker in various nations, they tend to feature a dissimilar design and specifications. Take for Vivo V17, which was unveiled in Russia a few days back as a re-branded Vivo S1 Pro. And now, a new phone with a different design and a different set of specifications(according to the previous leak) is about to land in India with the same V17 branding.

Going by the promotional poster leak, the Vivo V17 for India will feature an L-shaped quad-camera setup at the top-left corner. Whereas, the same phone for Russia features a diamond-shaped camera setup at the centre. Also, the Indian variant will come equipped with a punch-hole display rather than a dew-drop notched display as found on the Russian variant. 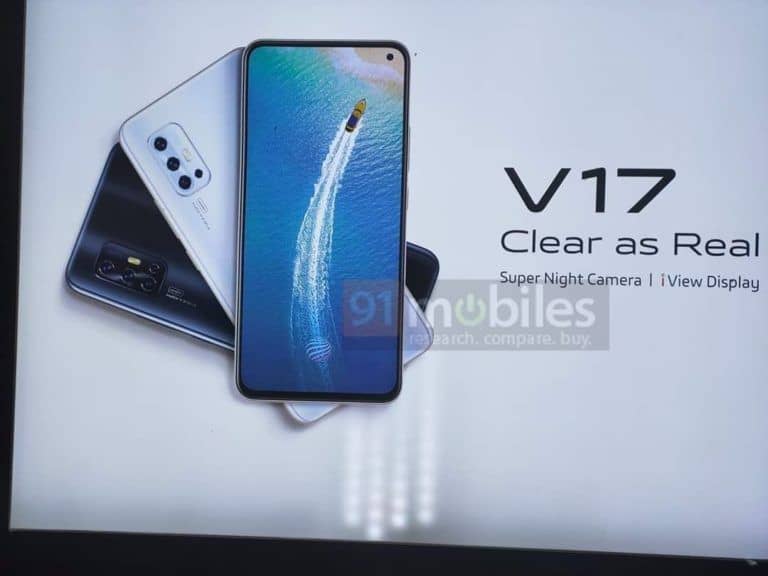 The Vivo V17 will be announced on December 9 in India and will come in two colour variants – Glacier Ice & Midnight Ocean.