Chinese manufacturing giant, Xiaomi, is expected to release the Xiaomi Mi 10 series as a successor to the Mi 9 series.  However, we now have the first confirmation that Xiaomi Mi 10 Pro actually exists. According to a Weibo post from Xiaomi’s co-founder, Lin Bin, the Xiaomi Mi 9 Pro has a great vibe. However, Lin Bin also responded to news from netizens about Xiaomi’s next flagship mobile phone, Mi 10 Pro. 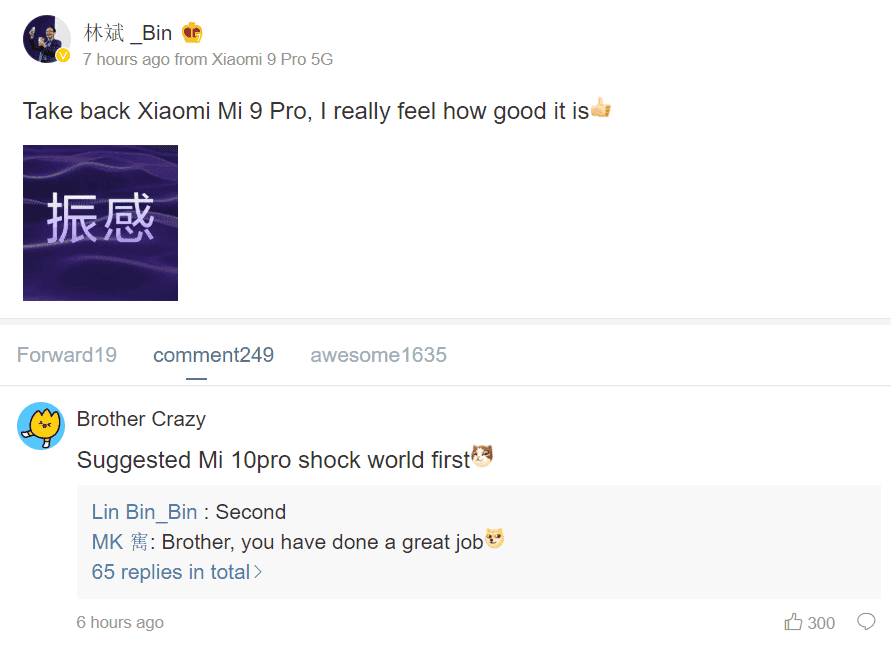 Lin Bin himself replied to a netizen who “suggested that Xiaomi 10 Pro vibe will be the best”. Lin Bin responded “second”. This means that the Mi 10 Pro vibe will be second to Mi 9 Pro. This is also the first time that any Xiaomi executive mentions the Xiaomi Mi 10 Pro. Judging from the release of Xiaomi’s new phones in previous years, this Xiaomi next-generation flagship machine will arrive in the first half of next year.

It is worth noting that there were media reports yesterday that the Xiaomi Mi 9 series has been officially removed from the official website. At the same time, two other Mi 5G mobile phones with the models M2001J1E and M2001J1C passed the 3C certification. There is currently no more information about Xiaomi’s next flagship phone. Nevertheless, we will keep you abreast with the speculations regarding the Xiaomi Mi 10 series.