The latest report from the market research agency counterpoint shows that in the third quarter of this year, Apple still dominates the global high-end smartphones market, with a market share of 52%, followed by Samsung and Huawei. The report pointed out that Apple’s market share in the high-end mobile phone market continued to increase in the third quarter of this year, from 48% to 52%, and they have not encountered real challenges in this field. Samsung and Huawei followed closely, but their market share is only 25% and 12%.

Apple’s is firmly in the first place with no rivals

The iPhone XR has become the world’s best-selling high-end model, mainly due to the relatively reasonable price-performance ratio, while Huawei ‘s Mate 30 and P30 series have been selling well in the Chinese market (Huawei’s sales in the high-end market in China accounted for more than 80%), these two new models directly increased their share in high-end smartphones. 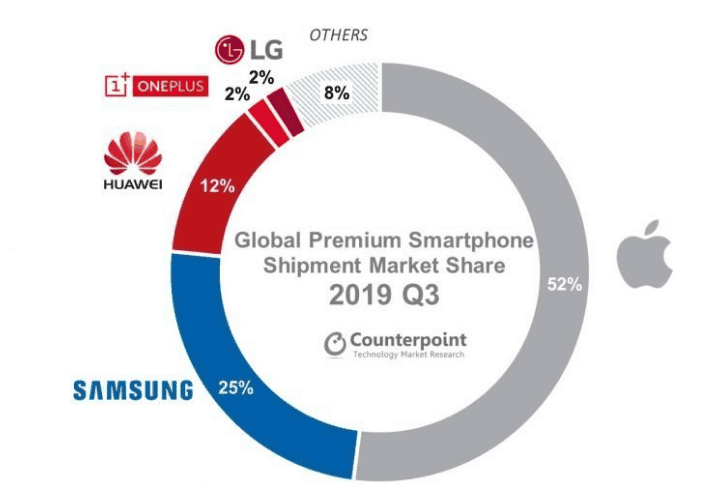 It is worth mentioning that One Plus is also among the top five in the list. The results have risen rapidly and the market share has reached 2%, mainly because its models are very popular in the Indian market.

Consumers’ ability to accept high-end smartphones is getting stronger

Generally speaking, the global consumer’s acceptance of high-end models is getting higher and higher. Driven by the iPhone XR, the price range of $ 600-799 is still the center of high-end smartphone market sales. Models in the price segment $800-999 have also started to increase, driven by the Galaxy S10 and Galaxy Note 10 series, a year-on-year increase of 145%. 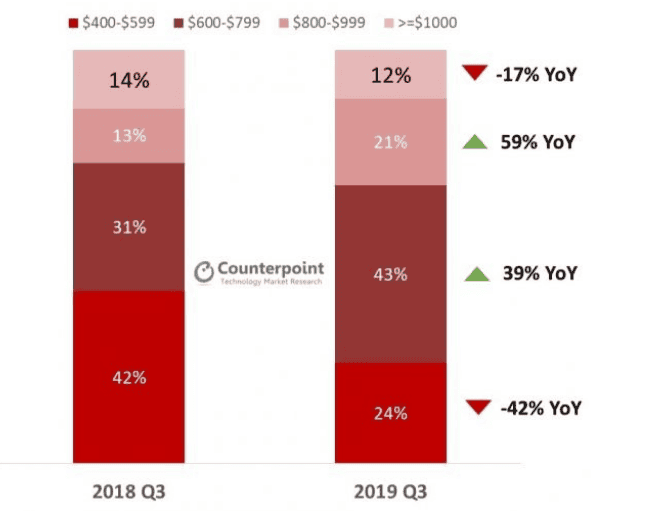 The report also shows that in the third quarter of this year, the market price of high-end smartphones has continued to rise, and 5G mobile phones have played a certain role. Its sales price has increased by about 5% in the third quarter. Regarding the current market share of 5G mobile phones, Samsung ranked first (accounting for 74%), LG and Vivo has 11% and 5%. South Korea has the world’s first commercial 5G networks, so Samsung and LG have unparalleled advantages.

Previous Huawei was about to give up on smartphone business 8 years ago!

Next Redmi K30 Pro will officially arrive in March 2020